Raleigh author J.L. Hilton’s debut novel Stellarnet Rebel was published by Harlequin imprint Carina Press in January, with a release party at Tir Na Nog. A fitting place, as the space station at the center of the novel contains an Irish Pub and one of the book’s protagonists, Genny O’Riordan, well, you can probably guess by the name. (Also, there’s a certain shortage of local Glin establishments, though that’s more than understandable considering it is one of the alien races invented by Hilton for the book.) The series combines cyberpunk, video games, space adventure, blogging, and even a couple scenes of (well done) character- and plot-relevant sex in a page-turning package. Earlier this month, Carina Press published book two, Stellarnet Prince, and in this week’s edition of The Hardest Part, Hilton talks about the struggles of writing the sequel. Under deadline. And with the rest of a full life happening. – Bull Spec 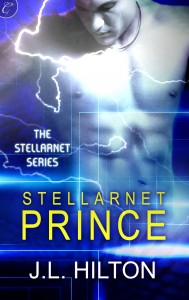 With a sequel, an author has to walk a tightrope between context and clunky exposition, back story and boring, while avoiding the flaming faults of the first book and juggling its strengths. On a unicycle… of… deadlines. (Can I stop the circus metaphor now? I’m starting to hear creepy calliope music…) This is a challenge, to say the least, and some authors experience terrible writer’s block with sequels. Or so I’ve heard. I didn’t, but then Stellarnet Prince is the first second book I’ve ever written. There’s always next time.

I wrote my debut novel, Stellarnet Rebel, without the need to reintroduce characters or remind readers. I took my own sweet time building worlds, inventing an alien language, and figuring out how the hero sneaks into the military zone of Asteria Colony to steal a spaceship. When do the alarm bells go off? How many airmen are wounded in the process? Can he make it through the metal doors before they close? I need to research non-lethal weaponry, rubber bullets, flashbangs, shock poles… tomorrow.

But sequels come with unicycles. I mean deadlines. (There goes the music again.) I’d won a contract for Stellarnet Prince based on a partial and a synopsis, then had six months to add 75,000 words. And they had to be good words, too, dang it. So here’s where I mention I homeschool two children, am the founder of a local club and an annual charity event, and have a successful side business as a jewelry designer. I took two years writing and revising Stellarnet Rebel. But, no prob, I worked in newspapers. You learn to get shit done before midnight or you’re fired.

Given my full plate, constant interruptions are a hard part, but not the hardest part. I envy authors who can lock themselves away in a motel room or cabin. I haven’t sold enough books to be able to afford a good lock, let alone a secret Appalachian hideaway or a vacation. Plus, my husband would have to take time off from his job to stay with the kids, and I just can’t afford that much whiskey, either.

No, the very hardest part of Stellarnet Prince arrived unannounced around 80% completion, when my 7-year-old daughter said, “Are you almost finished with your book? Because I miss you, Mommy, the way you used to be.” Now imagine it with big, teary eyes and a trembling pout. Add a basket of starving kittens if it helps, because the way I felt, they might as well have been there.

Homeschooling, I spend all day with my children. But I understood what she meant. The way I used to watch movies with the family after dinner and she could snuggle in my lap. When I was available for bug slaying or Bandaid duty after 7pm. When I told her a bedtime story and sang her a song instead of just kissing her goodnight so I could get back to work.

After that, every time I closed my bedroom door to write, I thought about how she missed me. I couldn’t shake the feeling of… not guilt, exactly. Parental Responsibility grappling with Personal Reward? Existential angst? A Big Fricking Clock somewhere tickety ticking? Being seven years old only happens once, and then it’s gone. I can write for the rest of my life. I’ll never be as important to any reader as I am to my daughter right now. Balancing my love for her, and her ebullient love for me, with my love of writing is a more difficult act than the plotting, research or revisions of any sequel, because that tightrope runs right through my heart.