A love affair with aliens and monsters 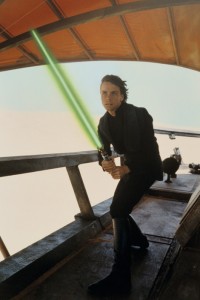 I’m trying to remember the first time I fell in love with an alien.

Does Luke Skywalker count? I know he looks human, but he is from another planet. I had such a crush on him from Star Wars through Return of the Jedi, I was really ticked when Leia turned out to be his sister. Ick.

My tween self also liked Tron. I preferred the digital “program” version to the real-world programmer, Alan. But I don’t think Tron counts as an alien, either. Even if he did glow and live inside of a computer.

I think my first foray into truly non-human alien-with-face-makeup romance must have been with Klingons circa 1989. We can thank Michael Dorn for that. If we’d all had the Internet then, I would have been one of those people who wrote fan fiction about Klingon snuggle fests. I know Klingons are all bumpy and bitey, but that’s part of the fun, right?

Oh, but a few years later I met the Cardassians of Star Trek: Deep Space 9. Those bad boys in black leather are wicked hot, sipping kanar while they tried to take over the Gamma Quadrant. Is it wrong to want to be a Bajoran love slave?

About the same time as ST:DS9 came Babylon 5. I didn’t remember much about B5 except the length of a Centauri’s “appendage.” But I rewatched the series in 2009 and fell madly in love with the Narn named G’kar (and I don’t know anything about his appendage, but that’s OK, we can work it out). He remains the subject of my laptop wallpaper even now, three and a half years later.

Ooh! But what about monsters, too? Clancy Brown’s touching performance as Frankenstein’s monster Viktor in The Bride. Nightcrawler in X-men 2. Red-skinned Hellboy and his blue friend Abe Sapien.

What is it about monsters and aliens that I find so attractive? After all, lizard skin and red eyes are not hot, they’re scary, right? Fangs? Scars? Horns? What’s wrong with me?

I think it goes back to my favorite fairy tale, Beauty and the Beast. Long before Disney created Belle the bookworm, I liked the idea that it’s the inside, not the outside, that counts. When you look like a beast, you must earn love with your personality and actions – kindness, generosity, self-sacrifice, bravery, wit – and not just your appearance. 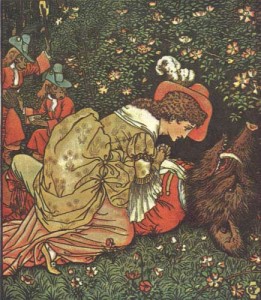 When someone has a monstrous or alien visage, I am forced to see a character’s true self without the distraction of human attractiveness. When they are bold, suave, noble, eloquent, shy or lonely, it makes their personalities and emotions even more vivid in stark contrast to their inhuman appearance.

When my heroine Genevieve O’Riordan meets Duin in Stellarnet Rebel, she is meeting an alien for the first time in her life. It’s not love at first sight. He has no hair, big weird eyes and webbed hands. His face is pale but the back of his skull is patterned in shades of green and gray, earning his race, the Glin, the epithet “frogs.” But, over time, she falls in love with him – his intelligence, tenacity, humor, compassion and courage.

For me, this is the essence of true love – looking deep, seeing someone’s true self, and loving them for who their thoughts, words and deeds, not just for what they look like on the outside. I wish more humans would do that.