Viewers of my YouTube channel are split between those who think FALLOUT 76 is garbage and those who enjoy it. I’ve been asked about a hundred times if I would play and even had some very generous people offer to buy the game for me.

Despite being a huge fan of Bethesda’s Skyrim and Fallout 4, I have little interest in FALLOUT 76 because I don’t like multiplayer online games. Same reason I didn’t get around to trying Elder Scrolls Online until just a few months ago, though it came out in 2014.

To satisfy my curiosity and the requests of my viewers, I decided to stream FALLOUT 76 when I discovered I could rent it from my local Redbox kiosk for the day. It took me about 40 minutes to download the required update before playing, but I have high-speed internet so your mileage may vary.

I discovered that FALLOUT 76 is not only multiplayer, it’s a survival game, similar to 7 Days to Die, Minecraft, No Man’s Sky or Don’t Starve. Bethesda might have been better off calling it Fallout Survival. Players have to worry about eating, drinking, diseases, and the weight of ammunition, as with survival mode in Fallout 4. Also, weapons and armor must be constantly repaired, as these items have a “condition” bar similar to Fallout: New Vegas.

The multiplayer aspect didn’t have much of an impact on my experience. I saw very few people, and they were either friendly or ignored me. No one seemed to be able to harm me or steal my stuff. I enjoyed the little notes and stories I found scattered about. Like this one I found in an outhouse: 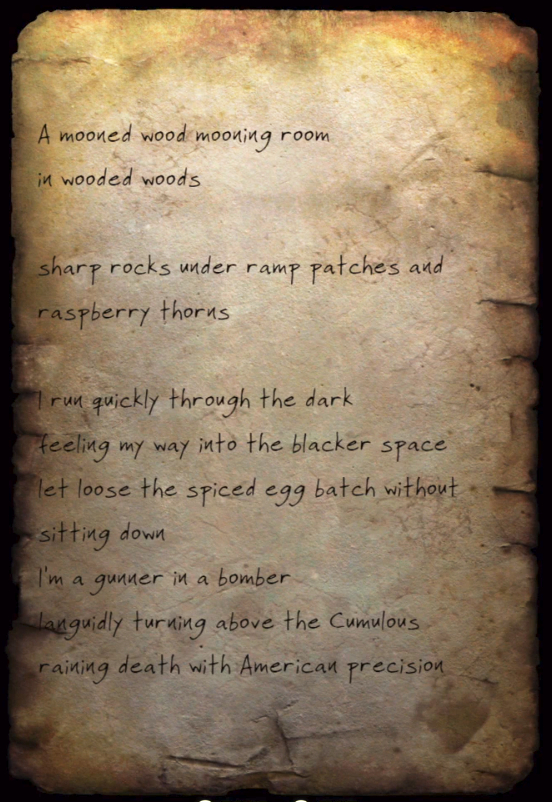 I don’t think FALLOUT 76 is horrible, but I’m not all that excited about it, either. If I wanted to play a survival game, I’d already be playing 7 Days to Die, since that’s my husband’s favorite. But I’m not into survival games right now and putting me in a vault suit isn’t going to change that.

FALLOUT 76 is available for PC, Playstation 4 and Xbox One. Rated “M” for mature audiences, for blood and gore, drug references, intense violence and strong language. Online interactions and in-game purchases are possible, which are also not appropriate for younger audiences.

My livestream was interrupted by loss of internet on my end, not a problem with Bethesda’s servers, so here’s part two: