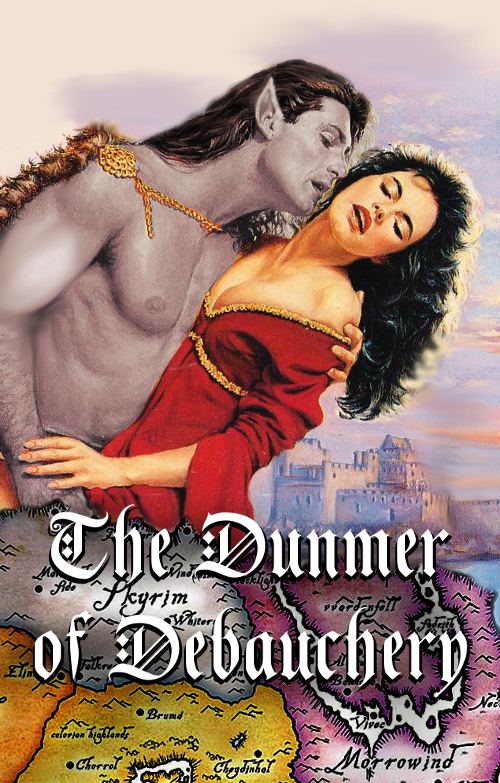 The Elder Scrolls V: Skyrim, Tamriel and its inhabitants belong to Bethesda. Zephyr Silvertongue is an original character.

Do not read if you are easily offended by fanfiction, erotica, or an Imperial Dragonborn who likes to lick Dunmer.

This was a challenging piece of writing for me, and it’s been more than four years since I wrote the previous story about Teldryn and Zephyr, “Tickling the Angry Troll.” My Skyrim fanfic is ribald and fun, but I wanted to take things a bit more seriously here. I hope this work captures both the passion and the poetry of their first night together.

THE DUNMER OF DEBAUCHERY

I left Iona with the Blades in Sky Haven Temple and spent a small fortune for the fastest horse in Markarth. Though its hooves beat a furious rhythm upon the roads between the Reach and the Rift, I could not return to my Dunmer lover fast enough. Teldryn Sero awaited me in Honeyside, my home in southeastern Skyrim, as far from Solitude and my husband as possible, and empty now of any housecarl to report our deeds. Iona would serve the Blades well but serve me better with her absence.

I’d never kept secrets from Stenvar. My husband witnessed the events of my life at my side, slaying enemies, forging alliances, counting coins… until Solstheim. The island nearly killed him. When he returned to Skyrim to recover, I’d hired the “greatest swordsman in all Morrowind,” whose boasting turned out to be more than a mere sales pitch. And, I, the Dragonborn, Nightingale of Nocturnal, agent of Dibella, favored of Sanguine, blood Imperial, found myself enthralled by a dark elf whose snide tongue wielded words as well as his hands slung spell or sword.

That tongue and those hands had been enough to grant me Dibella’s gift in the wagon to Windhelm. Now I yearned to discover what pleasures the rest of him could provide. And so I rode through dark of night, swift as a rumor, ruthless as the truth, past Helgen where Alduin World-Eater had belayed my execution, and into the icy windswept peaks of the Jerall Mountains.

A rag-clad skooma seller hailed me near Ivarstead, but recoiled when moonlight revealed the Nightingale insignia upon my armor. Though such miscreants only dabbled in thievery, they could recognize the leader of the Thieves Guild and dared not risk my wrath. He sputtered desperate apologies and I rode on without a word.

Dawn broke as I reached Heartwood Mill, and sunlight spilled down the Throat of the World. I crossed the bridge and took the north road around Lake Honrich to Riften’s main gate where I dismounted and left the horse in the stablehand’s capable care. My heart pounded like a blacksmith’s hammer as I approached the boat dock behind my home.

I would not seduce Teldryn smelling of horse and sweat, so I undressed and bathed in the lake. I had little to fear from the few farmers, fishers and millers waking to their morning chores. Karliah retained Goldenglow Estate, not far from off, and the gambler’s den of Faldar’s Tooth on the north shore answered to Maven Black-Briar, a powerful ally and personal friend. I even had the friendship of righteous Mjoll, so easily bought with a few careful words and the return of her sword, Grimsever. By all this, and more, did Jarl Leila Law-Giver declare me Thane of the Rift. In truth, I was safer here, swimming naked, than anywhere in Skyrim.

Refreshed, I gathered my gear, climbed the steps to Honeyside and unlocked the back door. Oiled hinges opened in silence and I entered the bedroom. In the dusty morning light, I could see Teldryn asleep on his back, one arm flung carelessly above his head, bare-chested and the rest concealed by bed covers. Naked and dripping, I shivered not with cold but anticipation, no doubt enraging the goddess Mara who’d blessed my marriage in the local temple. Her priests were probably writhing in uneasy slumber and rising from dark dreams as I lusted for a daedra-worshipping Dunmer.

Beverages, cheeses, sweet rolls, bread, butter and honey covered the table at the foot of the bed. Leaving my weapons and baggage on the floor, I closed and locked the door. I filled a tankard, sipped mead and drank in the body of a swordsman, more muscular than my sweet Bosmer archer, Faendal, not as bulky as a Nord or an Orc, but strong and agile. His chest rose and fell, mesmerizing as the waters of White River, gray skin peppered with darker gray freckles and curls of black hair. I spoke no shout to slow time, yet all of Mundus seemed to stop while I watched the mysterious mercenary who’d never revealed his face until declaring his love for me.

Climbing into bed, I pressed my body along his side, placing my hand over his chest and resting my head on his shoulder. His heart beat strong under my palm and his skin felt warm and welcoming as hearthstones, radiating his natural Dunmer heat. He smelled of woodsmoke, lavender, and his own unique distillation of Mer blood.

He didn’t move, didn’t even open his eyes, but his sleepy, sultry voice murmured. “I’d wondered where you would put your hands.”

I kissed his cheek. “Everywhere, in time.”

“Yet, you chose my heart first. You value my love, most of all.”

I caressed his arm. “And if I’d touched you here?”

“You’d want my strength and protection.”

I moved my hand from his hard bicep and traced one light fingertip along his brow. “And here?”

I touched the bridge of his nose, his violet lips, his chin, his throat, and drew a path down his chest to his stomach. I slid my hand under the blanket, over his thigh, and cupped his pouch of precious stones. He exhaled a sigh when I grasped his Elven rod, hard as a steel hilt wrapped in the softest suede.

“And if I’d touched this first?”

I gently nibbled the edge of his pointed ear and whispered. “But you’re wrong.”

I squeezed. “I want everything.”

The purple orb of a spell swirled in his hand. “I can give you even more.”

His tusk swelled from horker to mammoth size in my grasp. I recognized the unique light of conjuration magic, used to summon a variety of weapons — axe, sword, dagger, bow — but never knew it could manifest this sort of tool.

“Is this one of the fornication spells you spoke of?” I stroked the length of his conjured cock. “I thought they were just tales to taunt me.”

His hand glowed blue, cold as ice, and traced spirals around my breasts, which he warmed with his mouth. He slid his hand between my legs, sending a shocking chill through me that did nothing to cool my desire.

I wrapped my arms around him, kissed him, and felt the magical length of him between us. Like all spells, it had a limited duration and soon returned to its natural size. He raised a hand to cast the spell again.

“Don’t.” I laced my fingers through his and stayed his hand.

“Says the woman who boasts of bedding enormous Nords and Orcs.”

I held his red eyes with my own gray gaze. “I want you just as you are. No masks. No enchantments.”

His smug smile was more precious to me than Barenziah’s crown. Teldryn had every right to his conceit. He had no dragon blood nor gifts from the gods, and yet he followed me down every path without misstep. He had no bardic training, yet his voice was music and his wit as keen as Dragonbane’s edge.

“I swear by Aedra and Daedra…”

He quieted me with a kiss. “Oaths are as empty as a beggar’s purse. You break one, even now, to be with me. Don’t swear. Show me. Make me believe you.”

He was alchemy, and I had to taste him to unlock his secrets. He was a treasure map, full of unending riches, and I took my time exploring every landmark. He was my own Apocrypha, a library of forbidden knowledge, and I read every line, fingers probing like the tentacles of Hermaeus Mora, until I knew him well. Then I used every skill I possessed to whet his blade until he erupted like Red Mountain. His hands tangled in my hair as he thrust, flowing white-hot down my throat with a rush like the release of a dragon soul.

Teldryn took his turn at me, torturing with the flick of his tongue, light as a luna moth’s wing, building exquisite tension until I overflowed. Dibella’s gift shuddered through me but only made me want him more. I toyed with his long, elven ears and dark hair, as he kissed a path over my stomach and between my breasts. Eye to eye, heart to heart, we held each other and I felt his sword stiffen against my damp sheath.

“Every road we have traveled, every arrow from your bow, every word spoken by campfire and moonlight, every foul creature slain by your sword, Zephyr Silvertongue, is my stamina potion. Each moment with you is a drop in the vial of my desire. And I’ve collected too many, waited too long.”

“You need wait no longer.”

I pushed him onto his back and positioned myself at the tip of his cock. He grasped my head between his hands, fingers clutching my damp hair, and his eyes held mine as I took him, inch by inch. As light spreads through darkness, as water slakes thirst, as warmth seeps into cold bones, he filled me, not just in flesh but in spirit.

In bed as in battle, we moved like the gears of a Dwemer machine, attuned to one other with perfect precision. Constantly shifting, moving, grinding, fueled by the numinous fires of something deep and discarnate, I lost myself in a sacred realm of our own, climbing to a peak of unfathomable ecstasy as the sun climbed higher in the sky.

He was above me, my legs wrapped around his waist, hands on his backside, when Dibella’s gift rose in me again. I cried out the names of every god I could remember, until there were none left but his name.

He drew back for a final thrust, deft and deep, and I felt him spill into me. I clutched him until my nails drew blood. My body twisted and writhed, as I wrung every drop of pleasure from oblivion. His voice spurred me on, harder, faster, until the last spasm passed, and then it was a soothing balm, a singsong of love eternal and grateful joy.

I held him in my arms and knew that we were forever bound, heart and soul, Teldryn Sero and Zephyr Silvertongue, and not even the gods could tear us asunder.

How I left my husband for a guy with pointy ears