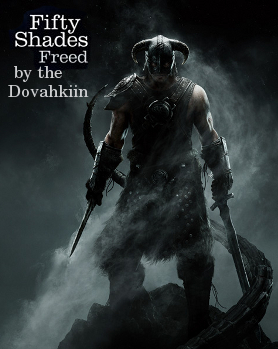 The Elder Scrolls V: Skyrim, Tamriel and its inhabitants belong to Bethesda. Zephyr Silvertongue is an original character.

Do not read if you are easily offended by fanfiction, erotica, witty banter, a housecarl who really knows how to hammer his Thane’s anvil, or an Imperial Dragonborn with a couple of tasty boiled creme treats.

This is a sequel of sorts to my previous Skyrim smut, “Come with me to Sovngarde,” and a prelude to “Tickling the angry troll,” which features a lot more Teldryn Sero.

“I NEED ANOTHER STAMINA POTION”

“Have you finished your bath, my Thane?” My housecarl waited as I wrapped a robe around my naked body.

“Yes, Argis, I have. You may empty the water and put the tub away.”

“Your hireling has asked me to move it to the alchemy room so he might bathe.”

“He can use it here.” I gestured to the large common area between my bedroom and the servant’s quarters. I had no idea what the original purpose of the chamber had been when the ancient Dwemer built Vlindrel Hall, but it now served as kitchen, study and storage. “It’s still warm near the cook fire.”

“I told him already, my Thane. But he wants fresh water.”

Curious fellow, the Dunmer. I’d yet to get a good look at his face, though we’d traveled together for months, finding the Black Books, assisting the residents of Raven Rock, and undoing the treachery of Miraak. Then we’d journeyed across the length of Skyrim to the stone city of Markarth. The wizard Neloth wanted a fresh briar heart, and what better place to find one than the Reach? But before venturing out to seek the Forsworn, I wanted to bathe, eat, drink and rest well, for the first time in weeks.

“Do whatever he asks, Argis. Obey him as you would obey me.”

I intended to know the spellsword a bit better, and bathing near my bed would have been ideal for that purpose. My husband, Stenvar, took care of my needs at home in Solitude, but much time had passed since my last visit to Proudspire Manor. Special services were often provided by mercenaries, along with swordsmanship. Though, so far, I’d not asked nor had the dark elf offered.

I hadn’t expected to travel with Teldryn Sero for so long, but assumed he’d die or abandon me in a draugr crypt, ash spawn attack or dragon’s fire before I left Solstheim. Perhaps he’d expected the same of me, until I’d shown myself a true Dragonborn. Stenvar had barely survived the island, despite his considerable skills. The experience had convinced my husband to retire and take up full-time fatherhood, caring for the orphans we’d found on the streets of Whiterun and Windhelm, and spending the piles of septims we’d collected on our previous adventures.

Teldryn Sero, whoever he was, had proven to be a remarkably capable match for my ever-increasing powers. With a wry wit, quiet feet, deadly blade, and powerful arsenal of battle magic, and despite the differences in our backgrounds, his fighting style complemented mine in every way. We trampled our enemies like a team of chariot horses, working in perfect unison. An affable traveling companion, thus far we’d shared similar opinions on topics ranging from vampires to Whiterun to the conjuration of atronachs. I found all of these qualities alluring, though I’d never been attracted to a Dunmer before.

I busied myself while Argis emptied and moved the large brass tub. I read scrolls, journals and books, and sorted the new weapons, staffs, gems and jewelry I’d acquired. I took quill, paper and ink and wrote a letter to my husband, which I would have Argis send by courier in the morning.

After my housecarl completed his tasks and returned to the kitchen, I sneaked into the main hall and approached the alchemy alcove near the front of the house. There were no doors in the entire dwelling, only those at the front entrance. My view thus unhindered, I could see the tub, and the back of Teldryn’s head, shaved but for a stripe of dark hair running down the middle. For once, he wasn’t wearing his chitin helmet and goggles. They lay on the floor, along with the red scarf with which he typically covered his face. I crept closer without making a sound. 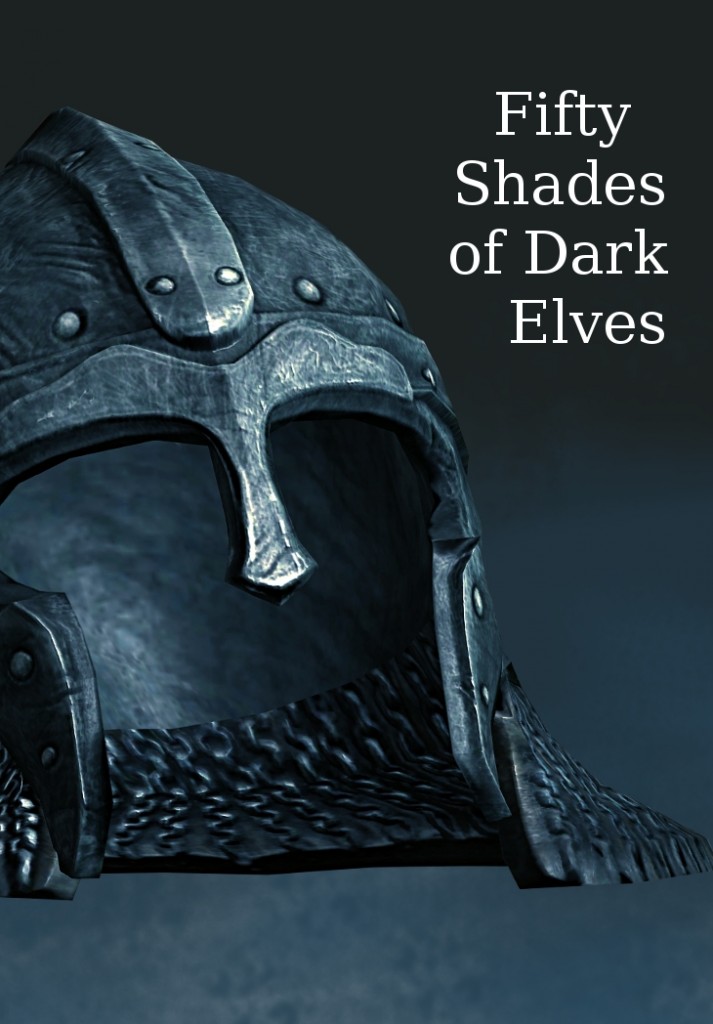 I straightened from my stealthy crouch. “I don’t deserve to lead the Thieves Guild. How did you know I was there?”

“By the silence. I’ve heard you moving about for the past hour, and then… nothing. That you were up to some nefarious purpose seemed the obvious explanation.”

“How did you know I hadn’t fallen asleep?”

“I didn’t hear you climb into bed.”

“You’re a clever one.” I lowered my voice to a seductive purr. “But my purpose isn’t nefarious.”

I took a step closer and could see the ashen tip of his left ear ending in a long point, the corner of his eye, and a streak of purple over his high cheekbone. A scar? A tattoo?

His lean, well-muscled arm rested along the rim of the tub and blocked my view of anything else, so I amused myself counting the freckles, darker gray on gray skin, that dotted his triceps and forearm.

“Why are you so mysterious, dark elf? Are you disfigured? Is that why you hide your face?”

“I assure you, I am the handsomest of Dunmer.”

I’d become quite familiar with Teldryn’s sarcasm. “That’s not saying much,” I quipped in return.

He rewarded me with his musical laughter. “Good night, Dovahkiin.”

“I would sleep better with someone beside me.”

“I believe you mean someone inside you. You should speak to your housecarl. He is dying to be of assistance to you in that regard. I can see it in his face. And his pants. I’m sure he’ll do anything you ask.”

The arrogant bastard, to refuse the Dragonborn AND an agent of Dibella, goddess of passion, anointed in the temple of this very city. He didn’t know what he was missing. I imagined myself taking the insolent dark elf by his bristle of black hair and dragging him back to my bed chamber, tying him down and enchanting his staff with every trick I knew. I felt flushed and damp at the thought. I could do it, but I wouldn’t. Dibella’s gifts could only be shared with the willing.

“You are not so insignificant to me.”

Aching and angry as if I’d been hit by a frost-enchanted warhammer, I returned to my room, blew out the candles, climbed under the covers and closed my eyes, alone. Within a quarter hour of sleepless seething, I heard Argis approach, noisy as peddler’s cart in his steel armor.

“Is there anything I can do for you, my Thane?” His low, husky voice bespoke the release of my tensions.

Dying light from the kitchen fire outlined the Nord’s hulking silhouette at my bedside. “The dark elf is a fool.”

No. In my experience, Teldryn Sero was anything but a fool. Though I felt like one, myself. No one had ever refused me before. To be denied by some dusty vagabond, wearing armor made from animal shell. If he thought he was too good to have his precious elven blade honed by Imperial lips, to Oblivion with him.

I rolled over, leaning on my shield arm. My robe dropped from my shoulder and revealed the curve of one breast, golden as an apple in the firelight.

“Pretend I’m not your Thane, and you are not my housecarl. If I am just a woman, and you are just a man, would you bed me?”

“I would. By the Divines, of course I would.”

I threw back the covers. When I opened my robe and my knees, he groaned at the invitation. Fumbling with the buckles on his armor, he practically ripped the metal pieces off of his body before he fell on me and buried his face between my legs.

Where my older and more experienced husband would have started at my toes and worked his way up each leg, then teased each breast to make the honey drip from my beehive before he lapped it up, Argis used a power attack in place of skill. Riding a sabre cat bareback up the Seven Thousand Steps of High Hrothgar might come close to the sensation of his unshaven mouth devouring me, licking, biting and sucking until his tongue triggered the little pressure plate of pleasure just above my treasure vault. I cried out and clenched his golden-red hair with both hands while he triggered it again and again.

He moved to my breasts like a starving boy eating boiled cream treats. When he put his lips to mine, I could smell myself on his beard, taste myself on his probing tongue. His woolly chest and thighs felt like soft moss over granite boulders. The musk of ale, sweat and steel surrounded me, the perfume of every male Nord. His equipment wasn’t as large as Stenvar’s, but adequate to the task. 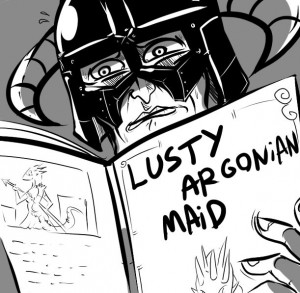 I wrapped my legs around him, but he would not invade the castle so freely offered. Instead, he rolled me over on my hands and knees, rubbing his cock against my backside, his hands caressing every inch of me. I spread my knees further apart and tried to impale myself upon his sword.

He groaned again, as if struggling under some great burden. “I … I would ask…”

His voice sounded strained. “To speak your name, my Thane.”

“Then speak it.” I didn’t give a skeever’s tail if he called me General Tullius.

Argis plunged into my damp cave, moaning, “Zephyr” and “Dragonborn,” at intervals. He clutched a cluster of braids and held my hair like reins as he slammed into me, again and again, grunting with each thrust.

I let him know how much he pleased me, encouraging him, crying out and begging for more. It felt exquisite to be taken so fiercely, wanted so intensely. I only wished he would pet my Khajiit while he hammered my anvil, and bring my frenzy to another climax.

I grasped his arm and twisted my body, pulling him off-balance and shoving him onto his back. I had the blood and soul of a dragon to make me strong. He didn’t seem to mind, though he struggled enough to make the victory sweet. I pinned his wrists and rode him for my own enjoyment, galloping as if I were pursued by the hoards of Oblivion. My breasts bounced against his chest.

“I need…” He gasped. “Another stamina potion.”

I slowed my pace but did not relent. I squeezed him between the walls of my secret passage and moved my hips like a tavern dancer.

“Another?” I teased, gripping his chin and looking into his good eye. “How many did you take before you came to me, Argis?”

“Three,” he growled through gritted teeth.

I let him roll me onto my back, his blade still buried to the hilt. He kissed me, pinching my nipples between his rough fingers and sending jolts of painful pleasure through me. I writhed under him and climbed my peak, even as I perceived the tension in him, nearing his own release. When I felt the throb of his cock, Dibella blessed me with her gift, again, and I moaned. He thrust, cried out and shivered as he joined me in ecstasy.

When the wave had crashed and our passions ebbed, he collapsed, his head falling to my bosom. I stroked his hair while he caught his breath.

“I’m honored, my Thane. Are you pleased?”

He lifted his head. “May I please you again?”

“In the morning. You can sleep here tonight.”

Wrapped protectively around my back, he soon snored softly in my ear. But that was not the reason why I couldn’t sleep.

How I left my husband for a man with pointy ears