How I left my husband for a guy with pointy ears

I’d hired Teldryn Sero because I didn’t care if he died. Little did I know I would fall in love with him and leave my husband in Solitude with a crate of gems, two adopted urchins, and a bottle of Colovian Brandy. 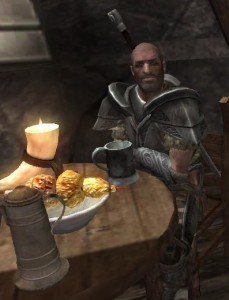 Don’t get me wrong, Stenvar’s a great guy. Before adding the Dragonborn DLC to my Elder Scrolls V: Skyrim, I’d carefully considered every marriage candidate in the game before choosing my Mr. Dovahkiin, and I spent a bit of time adventuring with other followers like Faendal the elven archer and Vorstag the tattooed Nord. I didn’t want someone like Balimund the blacksmith, who would sit at home, collecting a hundred septims a day for me – even if he could “perform miracles with steel.”

I wanted a partner, a fellow adventurer who would help me defeat daedra, pickpocket priests and loot libraries. A companion to warn me of impending danger, witness the wonders of Tamriel at my side, and take aggro so I could shoot things in the ass with poisoned arrows and plunder corpses.

Stenvar was a tank who could survive boobytraps and swing an axe like a lumberjack, but had the good AI not to rush into enemy dens and ruin my sneak-and-snipe modus operandi. He didn’t gripe about carrying my burdens, didn’t care who I robbed, and his gravelly voice reminded me a bit of Jayne Cobb. So we got hitched in the Temple of Mara and I proceeded to enjoy the “Lovers Comfort” bonus every chance I could. 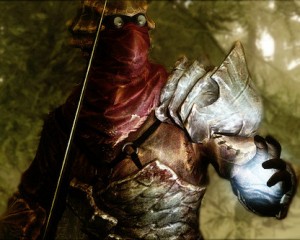 But after I added Dragonborn, I took my man with me to explore the new island of Solstheim, and he kept getting lost or killed. I got tired of reloading, so I fast-traveled his candyass back to Solitude and decided to hire the weird cthulhu/steampunk-ish dude in the Retching Netch pub. I reckoned if Tiny Goggles got himself killed, I wouldn’t have to reload, I’d just grab another piece of draugr fodder. Maybe that bitch Uthgerd in Whiterun.

Teldryn claimed to be the best swordsman in all Morrowind — or as he is known on Tumblr, the “hunkiest swordhunk in all Morrowhunk.” I quickly discovered that the dark elf possessed sweet one-handed skills, and a lethal arsenal of conjuration and destruction spells. Best of all, he had personality, a personal history, and an extensive amount of dialog. I found myself visiting places in Skyrim just to hear what he would say about them. Often, his opinions matched my own. Vampires sucked, Whiterun was unimpressive, Morthal wretched, Markarth a wonder, and Riverwood a lovely place to settle down.

But his voice ultimately won me over. The melodious, theatrical flair to the way he delivered every line, often dripping with slick sarcasm. “So! this is Riften. Glover Mallory told me a good deal about the place. It looks exactly as I’d pictured…” One can’t help hearing the unspoken “a complete dung heap” at the end. Or the Shakespearian way he cries “Lead on!” after I finish sorting his inventory, the words “and let slip the dogs of war!” run through my mind every time. 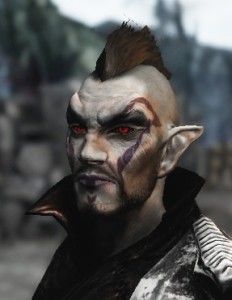 Teldryn without his mysterious mask

Divorce isn’t possible in the game, but Teldryn is one of the few followers who can’t be married, anyway. He’s also one of the few who can’t be a steward, so my plans to build him a love nest with Hearthfire aren’t possible, either. Damn Bethesda programmers, you’re worse than the vermin that infest the ash wastes back home!

Together, Nightingale and spellsword, we cleansed the bile-spewing Afflicted from the underground fortress of Bthardamz, read the Oghma Infinium, released a trapped demonic pirate from the bowels of the mage school, negotiated a temporary ceasefire between warring factions, and captured the dragon Odahviing, who took me to Sovngarde to defeat Alduin world-eater. We pickpocketed our way to skill level 100 and the Perfect Touch perk that finally allowed me to remove his helmet and see his handsome face. Then we joined the Imperial side of the war and liberated his fellow Dunmer from that racist prick Ulfric Stormcloak of Windhelm.

Curious, I looked up the voice actor who enchanted Teldryn to life. Turns out he’s Dan Donohue, a Grammy-nominated Shakespearian performer who also portrayed “Scar” in Disney’s Lion King on tour and on Broadway. Which explains a lot. If you want to hear more of him, listen to his Hamlet. He’s got sword skills IRL, too. Check out this video from the Oregon Shakespeare Festival (he’s the redhead).

Thanks to Teldryn Sero, I’ve enjoyed Skyrim that much more. Sorry, Stenvar. But, hey, our house in Solitude is next to the bards college, and if you can’t get one of the musicians to “play your flute” once in awhile for a handful of flawless emeralds, it’s not my fault.

See my “5 Questions” interview with Dan Donohue over at CharlotteGeeks.com