When I found the free PS4 demo for ROCK OF AGES II: BIGGER & BOULDER, I couldn’t wait to try this silly game that’s part Monty Python and part mini-golf.

ROCK OF AGES II is a “giant rocks rolling through historical/artistic ages” tower defense racing video game developed by ACE Team, an indie studio based in Santiago, Chile, who also created another clever comedy game I tried back in October, The Deadly Tower of Monsters. 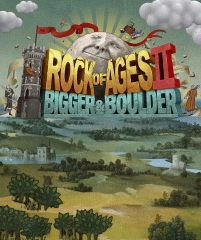 The sequel to Rock of Ages (2011), ROCK OF AGES II was released in August 2017 for PC, PlayStation 4 and Xbox One. Game content is rated E10+ for everyone ten and up. There is single-player or two-player local co-op. For PlayStation, the online multiplayer requires a PS+ membership.

ROCK OF AGES II is currently $14.99 on PSN and Steam. Learn more at RockofAges2.com.

This entry was posted in Video games and tagged Rock of Ages, Try-It Tuesday, Video Games. Bookmark the permalink.