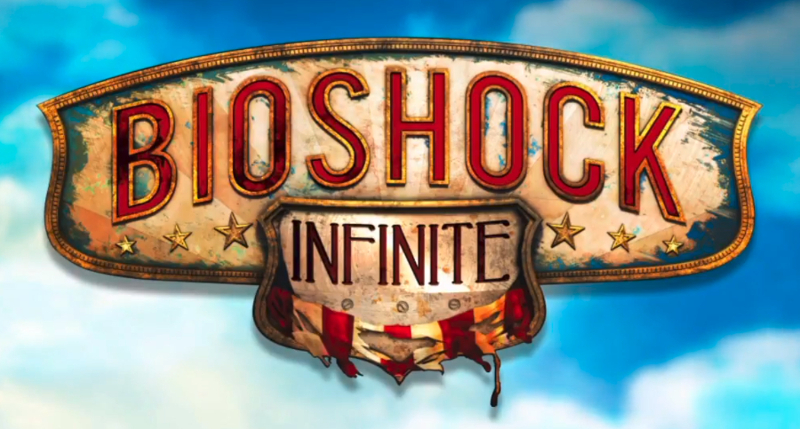 But I do have some questions, observations, and criticisms. Some will, no doubt, be addressed with further gameplay. We’ll see!

I thought the carnival booths were a clever way to offer a tutorial that didn’t seem like a tutorial. But, when shit got real and I actually had to fight, I felt woefully overwhelmed and ill-prepared, fumbling and frustrated. Instructions flashed briefly on the screen and I didn’t have time to read them because I was busy trying not to die.

Unlike previous BioShock games, there’s no map, no way to carry health kits or salts (the equivalent of EVE hypos), and no weapon wheel. I can only carry two weapons at a time. A vigor called “possession” replaces hacking, while doubling as a way to turn enemies against each other, but it’s unpredictable. Some turrets I possess remain friendly to me forever, others switch back to unfriendly within seconds. So, no, not really like the hacking mechanic in previous games.

Why are there “vigors” at all? In BioShock, plasmids were invented by scientists who moved to Rapture to be free and unfettered in their wild pursuit of technology, thanks to the libertarian ethos of the city’s founder, Andrew Ryan. In BioShock Infinite, having weird powers doesn’t seem to fit the right-wing religious ethos of Columbia. One of the citizens on the beach of Battleship Bay mentioned Darwin and was warned to keep his voice down. Yet, the community embraces science when it comes to mechanical horses and vigors?

Is the half-naked succubus-shaped bottle of Devil’s Kiss meant to demonstrate the hypocrisy of this society or is it just sloppy storytelling? 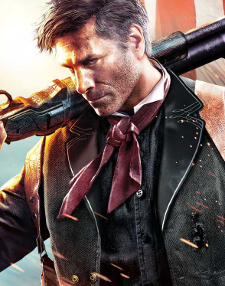 I’m not sure how I feel about the voiced protagonist, which is new for the BioShock franchise. There’s something about being inside someone’s head, especially when they have an interesting personality and their observations are integral to the plot. For example, I loved Daud in Knife of Dunwall and Billie Lurk in Death of the Outsider. I also liked Garrett in Thief. But, so far, I don’t feel like Booker’s “holy shits” and game prompts (“I should use that skyline to reach monument island”) are terribly interesting, insightful or necessary.

I’m super frustrated with the stealth mechanic, or lack thereof. My attempts to sneak were dismal failures. Crouching seems to be designed for ducking behind cover when bullets are flying, not for sneaking up on enemies. There no indicator to tell you if you are hidden or not, other than the game constantly flashing a reminder to “press O to stand up,” as if to reiterate, “This is not a stealth game, you idiot.”

The game automatically saves but not very frequently. It may be possible to reload “chapters” and play a level again, but if I have to quit in the middle of a level and the game hasn’t saved in awhile, I’m required to replay a chunk of the game over again next time. I’d appreciate being treated like a Big Girl and allowed to choose my own saves, please.

Utterly ridiculous is the tendency for enemies to shout out that they’re reloading during a gunfight. As if to say, “Please run up and shoot me in the face right now!”

I’ve got a LOT of issues with the rescue of Elizabeth from Monument Island, aka Indiana Jones saves Disney princess from the KKK.

1) I shot a shit-ton of cops and Comstock set fire to his own zeppelin to stop me, then suddenly told his army to “stand down.” Why? I met no resistance at all, entering and moving through the tower. It made no sense.

2) How does Elizabeth know which way to go during the escape? She’s surprised to discover that she’s being watched, so she’s never been through the tunnels before, yet she’s saying “this way” like she knows what’s what?

3) How is it helpful to have a ginormous mechanical bird who loses its shit and rips the place apart when it’s supposed to be protecting her? Did the bird wreck the Columbia statue, the bridge and other parts of the town, too? Why?

4) Why didn’t my bullets harm the bird’s glass eye, but being underwater made it crack? Then why didn’t Booker break his neck when he hit the water? 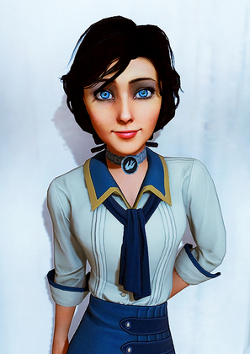 5) I spent hours trying to locate Elizabeth, only to have her disappear and be told to find her AGAIN. Really? Yeah, yeah, I get it, she’s innocent and free-spirited, caged bird and all that. Whatever. I really don’t like plots that revolve around dumb young women. I swear, if she says the phrase, “I can take care of myself,” at any point, I’m going to leave a flaming bag of poo on Ken Levine’s doorstep.

6) Elizabeth’s dress and hairstyle reminded me of Belle, and the semblance is reinforced by finding her in the library, which was an important location in Disney’s Beauty and the Beast. Even the way she dances and sings is reminiscent of a Disney princess. Is that intentional or unintentional? Homage or satire?

7) I find the tired old “damsel in distress” trope irritating rather than endearing. In BioShock 2, the story revolved around rescuing Eleanor (who was also called a “lamb” and was an unwilling object of a religious cult — why did they recycle this same plot?). But BioShock 2 did a great job of subverting the trope. Eleanor rescues her rescuer and kicks ass. Plus, Subject Sigma’s survival was tied to hers because of their pair bond, and emotionally because he was her “daddy.” Booker has no tie to Elizabeth. She’s a job, nothing more. At least, far as I can tell — if he knew more about her, wouldn’t he say so, since, y’know, he’s a voiced protagonist?

Based on the brilliance of BioShock, BioShock 2, and Minerva’s Den, I’m eager to play BioShock Infinite. But I have a bad feeling I’ll end up with a verdict similar to Thief — really wanting to like it but not being able to look past its glaring problems. I hope I’m wrong.