MIDAS BOX is a steampunk adventure for the whole boring family

This review originally appeared on the Contact – Infinite Futures SF blog on March 23, 2015. 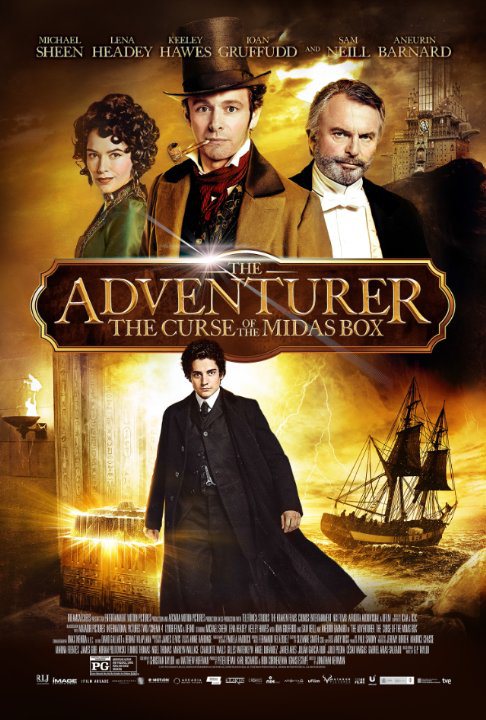 The Adventurer: The Curse of the Midas Box is a Victorian steampunk movie for the entire family… assuming the entire family enjoys watching BBC costume dramas, which are a bit more sedate than the standard Hollywood fare.

The unwieldy title seems a desperate attempt to assert its identity — “Truly, I’m an ADVENTURE movie about an ADVENTURER!” — in the face of reviewers using such words as “lackluster,” “slow and joyless,” “dull,” and “meh.”

This isn’t Goonies nor is it National Treasure. My family enjoyed those movies, but we also appreciate period pieces — Young Sherlock Holmes, From Time to Time, Fairytale: A True Story, Larkrise to Candleford, Stonehearst Asylum, and Jane Eyre — and pseudo-Victorian movies like Stardust. So we enjoyed Curse of the Midas Box, but we seem to be in the minority.

The movie ends on a bit of a cliffhanger and we’re hoping for a sequel. The abysmal 15% critic rating and 34% user rating on Rotten Tomatoes bode otherwise. We’ll just have to read the books — which have also been panned as boring.

Some reviewers say it’s “too dark.” but I don’t think Midas Box any darker than Harry Potter or Indiana Jones. Sam Neill twirls his mustache as the villain, but it’s not as if Midas Box is Peaky Blinders or The Tudors. Forever is one of my favorite TV shows at the moment, so it was nice to see Ioan Gruffudd as Mariah’s father, but he isn’t an immortal coroner in this story. There’s a spark of Cersei’s deviant evil in Lena Headey’s performance, but Midas Box is nothing like Game of Thrones, either.

If you want blood and boobs, look elsewhere. Midas Box is the first in what is intended to be a PG-rated franchise based upon novels by G. P. Taylor. Taylor is a former Anglican vicar according to his biography, and author of several novels for young adults, including New York Times Bestsellers Shadowmancer and Wormwood.

Nor is this Harry Potter or Twilight. Main character Mariah Mundi is a handsome if taciturn 17-year-old with dark curls and haunted eyes but has more important things on his mind than girls — such as whether or not his beloved family is still alive. I like seeing familial love and devotion as a motivator for young heroes. Lilo & Stitch, Frozen and Brave did that, too.

Mariah, not being a bucket of raging hormones nor an embarrassment to, or embarrassed by, his family, endures a series of unfortunate events to save his parents and younger brother from nefarious men who want the mysterious titular treasure. A dashing British version of Indiana Jones and a young hotel maid assist him in his mission, while children go missing a la Chitty Chitty Bang Bang(another steampunk fantasy adventure for the whole family, loosely based on a book by James Bond author Ian Fleming).

Intelligence, perseverance, devotion, friendship and bravery are needed to save the day. When Mariah does attempt to use magic, he quickly finds out just how dangerous those supernatural forces are. The actual Midas box may not even be magical at all but possibly divine or alien in origin — I don’t think the nature of this particular MacGuffin is ever explained.

The Adventurer: The Curse of the Midas Box had a budget of $25 million yet a very limited theatrical release in January 2014 with a scant $6,399 in reported U.S. ticket sales and about $122K elsewhere. It went to DVD just a month later. As of this writing, it’s available on Netflix streaming.