Why would aliens menace Earth? 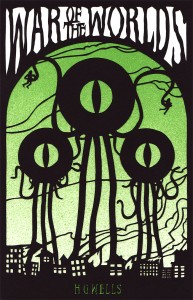 War of the Worlds paper cutting from the Freakshow Blog

If habitable planets and resources are abundant in the Milky Way, then why would aliens attack us?

SETI Institute senior astronomer Seth Shostak recently told NBC News Science Editor Alan Boyle that any aliens who could make it to Earth would be waaaaay ahead of us technologically. And if they’d solved all of the problems of space travel, they’d be able to solve their own food shortages or environmental issues without needing to eat us. They would be able to fix their own reproductive issues without kidnapping human females. They could build their own servants without needing to enslave us. Natural resources such as water (ice), minerals and gases are abundant on asteroids, moons and uninhabited planets. No need to steal them from our world.

So what plausible motivation remains? Evil for evil’s sake?

Shostak served as one of the consultants for last year’s big alien-attack movie, “Battleship,” and although he made several suggestions for the villainous aliens’ motivation, the filmmakers didn’t pick up on any of them. Instead, the motivation was left unsaid — which is kind of a Shakespearean thing to do. “These guys are just like the bad kids down a dark alley. They’re just malevolent,” Shostak said. “They’re baaad.”

It bears remembering that science fiction isn’t just about science. Authors and filmmakers often function as psychologists or historians as much as (or more than) they are scientists. Alien invasions stories are dramas based on our own trespasses and our worst fears.

War of the Worlds can be interpreted as a commentary on evolutionary theory, British Imperialism and Victorian superstitions, fears and prejudices. The film They Live satirizes the 1980s as a period of conspicuous consumption in which the (hidden alien) elite oppress poverty-stricken humans and a shrinking middle class. Falling Skies depicts the survivors of an alien invasion that destroys 90% of the population — reminiscent of the estimated percentage of indigenous Americans killed by plague after Europeans arrived.

In my Stellarnet Series, it’s not Earth but an alien world that’s invaded by other aliens. And while, at first, the invasion seems based on sheer malevolence, the real reasons come to light as the plot unfolds through books one and two. It’s no coincidence that I wrote book one while we were still embroiled in an Iraq War fueled by false pretenses. Or that Tikati accusations against the “lazy, untrustworthy” Glin are paraphrased quotes made by Anglo-Saxons about the Irish, over a century ago.

What are some of your favorite alien invasion stories? What were the reasons behind the fictional invasion? Is it necessary for an alien invasion to be scientifically — or historically — sound, or does eeeevil suffice as a motivation?