Romantic jewelry, past and present

This post originally appeared November 13, 2012, on the Everybody Needs a Little Romance blog.

I describe myself as a storyteller and jewelsmith because I’m both an author and an adornment artist who creates unique, wearable items inspired by science fiction and fantasy. I always include jewelry in my stories and I have a lifelong fascination with the stories behind jewelry.

The most well-known piece of romantic jewelry is probably the engagement ring, which dates back to ancient times. Early engangement rings were made of bone, iron, leather or woven hemp, and have been worn on the “ring finger” of the left hand for centuries as a kind of charm to bind the wearer’s heart. 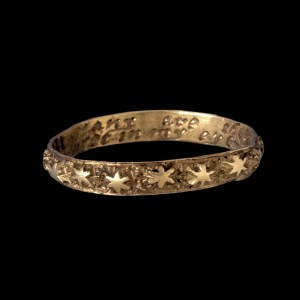 18th century English posy ring. Inscription reads, ‘Many are the stars I see but in my eye no star like thee.’ Image courtesy of the British Museum.

The posy ring was a simple band of gold with an inscription of love. Messages included ‘Feare not mee, i’le faithful bee,’ ‘In love abide till death devide’ or ‘True love is endless.’ These were popular from the 16th through the 18th centuries in England and France.

The diamond is now a popular symbol of love and romance. The 189-carat Orlov Diamond was given to Catherine the Great of Russia by Count Grigory Orlov in the hope of winning her love. Richard Burton bought the 69-carat “Taylor-Burton Diamond” for his wife Elizabeth Taylor.

But diamond engagement rings didn’t become common until the 1930s. One hundred years earlier, in the 1830s, Queen Victoria wore an engagement ring shaped like a serpent with an emerald set in its head.

Another popular piece of romantic jewelry from the Victorian Era is the dearest ring, where each stone begins with the letters that spell D-E-A-R-E-S-T – diamond, emerald, amethyst, ruby, emerald, sapphire and topaz.

If you’re of Irish ancestry like me, you’re probably familiar with the claddagh ring, a love token that might be given to friends, family or a spouse. It features two hands clasping a heart, and the heart is topped with a crown. The hands represent friendship, the heart love, and the crown loyalty. These rings have been made in Ireland since the 1700s.

In my Stellarnet books, the Glin don’t have rings, but they do have romantic jewelry, because even aliens need a little romance. They have something called a nagyx or soul stone. Every Glin wears their soul stone from birth to death, unless they meet their soulmate. Then they exchange stones to symbolize a bond that goes beyond marriage – and in fact, some Glin have both a spouse and a nagyx. A soul bond is one of the few things the Glin consider absolutely sacrosanct.

What’s the most romantic piece of jewelry you’ve ever received? One of my favorite pieces is an amber pendant my husband bought in the gift shop of the Art Institute of Chicago, while we were on our honeymoon. He knew I loved amber, and later when our second daughter was born, he suggested Amber for her name.

Another piece I love is an art nouveau-style pendant that he gave me before our engagement. On one of our first dates, we attended an Alphonse Mucha exhibit at an art museum. He saw how much I loved art nouveau and later bought me the pendant. To me, this is a perfect example of romance. It doesn’t have to be roses, chocolate or diamonds. Romance is paying attention to what matters most to the one you love.