This interview originally appeared November 16, 2012, on the Otherworld Diner.

The Otherworld Diner: If you were captured and tortured by evil space pirates, what would be your authorial equivalent to name, rank and serial number?

TOD: What if the space pirates were sexy and chaotic neutral instead of evil?

Can they be Cardassians? I love a man with dry wit and neck ridges. 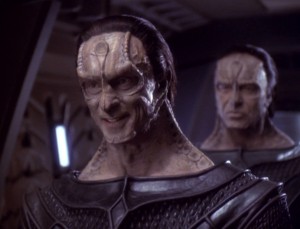 TOD: Why are you drawn to include speculative and cyberpunk elements in your fiction? How do you think it enhances the plots or characters?

I enjoy writing speculative fiction because I love imagination and creativity. I grew up with sci-fi and fairy tales. They are mind candy. Twilight Zone was my favorite TV show as a kid. At the age of 4, I liked H.R. Pufnstuf and had a huge crush on Jimmy.

Not to say that stories about everyday people in the everyday world are boring. They’re not. They’re exciting, tragic, uplifting, amazing, and frightening. As a newspaper reporter, I wrote true stories about good deeds and bad deeds, and people from all walks of life – war vets, criminals, soldiers, farmers, students, politicians, police, firefighters, athletes, business owners, mothers, fathers, kids with cancer, grandpas with heart transplants.

But I think, in some ways, the more imaginative the story, the closer it can get to truth. Writing about space aliens, magical wizards or undead minions is a way of exploring what it means to be human. It’s also a way of defining who we are and what we believe in the real world, by creating a personal mythology.

In Star Trek, they’ve conquered silly things such as sexism, racism, imperialism and greed – which is noble and inspiring, but not realistic. In Babylon 5, they’re still reading newspapers printed on paper, for goodness sake, in the year 2258. And then there’s Firefly, which regresses into Wild West and Victoriana. Not that I dislike any of these shows. I love them. But I wanted to envision what a human race armed with an Internet, MMORPG’s, social media and smart phone apps might do when it starts settling space and discovering aliens.

TOD: If some famous director were going to cast you in the movie version of a speculative or paranormal romance novel (and you had the acting chops to carry it off), which book would it be and what character would you play? (Note: doesn’t have to be the hero or heroine. If preferred, you can list your role in the new version of a similar movie, since all movies seem to be getting new versions these days.)

I’d love to be Ogra in The Dark Crystal. Or Eunice St. Clair in Troll. I’ve always wanted to be that crazy old lady with crystal balls, vials, and cool stuff, who helps the hero along his or her journey. Or maybe Sophie in Howl’s Moving Castle. Sorry, do those count as “romance”? No? Um… if I were younger, I’d like to be Stormy Gail from the steampunk time travel books by Christine Bell. Or maybe Isabeau d’Anjou in Ladyhawke (as I am now, I could only play Father Imperius, but that would be cool, too).

TOD: Do you have any writing rituals, quirks or requirements, like background music, flavored coffee, meditation–medication!–or what have you?

I can’t write to music, I prefer silence, but I do listen to music sometimes while I’m plotting out a scene in my mind. For example, I used “Wake Me Up Inside” by Evanescence while staging a fight between J’ni, Duin and some thugs in Asteria Colony. Or I listened to “Hope Vol. 2” by Apocalyptica while working out a love scene in chapter 21 of Stellarnet Rebel. Those songs make me feel the emotions in those scenes, and help inform my writing.

I drink a lot of water anyway, but water has a special significance to the Glin, so I often have a cup of water with me while writing the Stellarnet books. Other than that, I must do something to “reset” my mind, when I’m changing gears from homeschooling my kids all day to being in the Stellarnet world at night, so I play Facebook games. For awhile it was Sims Social, then Candy Crush and Solitaire Blitz. At first, there were many arguments along the lines of “Leave me alone, I’m working” and “No, you’re not, you’re playing games!” But I need that mental transition when I first sit down at the laptop, or I find it difficult to concentrate on writing.

TOD: What were your favorite childhood (as in pre-teen, even) books or movies? Can you spy the seeds of SF and paranormal romance budding even then?

Oh, heck, yeah. I’ve mentioned Twilight Zone, Dark Crystal and Ladyhawke already. I also grew up with Star Wars, Star Trek, Buck Rogers, the original Battlestar Gallactica, Alien, and some of my favorite movies were Somewhere in Time, Time After Time, The Time Machine (1960 version rerun on TV), Labyrinth, and Hawk the Slayer. I read Michael Moorcock, Ray Bradbury, Robert Heinlein, Narnia Chronicles, Dragonlance and the Twilight: Where Darkness Begins series from the ’80s. In college, I discovered Diana Gabaldon. 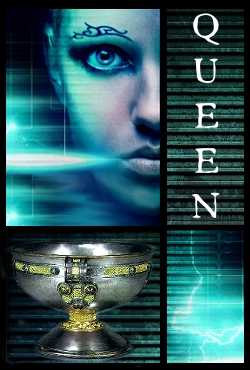 TOD: What about this tarot reading stuff? Do you read the cards for your characters to try to decide where the plot should go next?

I started reading tarot cards in 6th grade. That was almost thirty years ago. I don’t use them as writing tools, but I’ve incorporated them into my writing. In Stellarnet Prince, there’s a sim character, a kind of holographic projection with AI, who uses tarot cards as a search engine interfaced with the Net.

For fun, I created tarot cards of several of my characters for Halloween.

TOD: Do your characters “take over”?

My characters do come to life, as happens with many authors. I might want to have them do something in a particular way, such as when I wrote Stellarnet Rebel. I had a scene where I wanted Belloc to demonstrate to the heroine his knowledge of various human dances – La Volta, Galliard, Tango, Waltz. But they had other ideas, no matter how many times I tried. I finally gave up and wrote what they wanted to do, which was all full of sexual tension and much more interesting.

If I’m really deep into writing a novel, characters will sometimes linger in my head and give me a running commentary on other areas of my life. “Really, humans find this sort of thing exciting? They don’t even eat the football when the game is over.” Shut up, Duin. “That politician is an ezzub. He should be whipped with a wurak.” Shut up, Duin. “This lemonade is too sweet. Why do humans like everything so sweet?” Shut up, Duin.

I probably shouldn’t admit that.