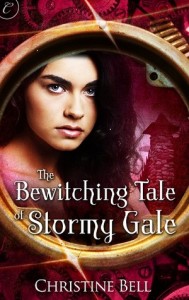 I love time travel stories. Whether its Bill and Ted’s Excellent Adventure, Somewhere in Time, or Time Machine (1960 version), if it involves a mash-up of two or more time periods, I’m there with bells on. In this case, Christine Bell, whose latest book The Bewitching Tale of Stormy Gale I had the privilege of reading in advance of its release on May 28, 2012.

This is the sequel to The Twisted Tale of Stormy Gale, the adventure of a former Victorian street urchin turned time pirate who is adopted by an inventor and grows up in the 1990s with a brother named Bacon Frogs.

In this new adventure, Stormy is on the tail of a suspicious man seeking mercury in 1841 London, and ends up in the middle of a Salem witch hunt. A little bit Doctor Who, a little bit Mission Impossible (cue the theme music: dun dun da-da…), not too obnoxious on the steampunk, written as a first person narrative — which I found a hoot, but YMMV.

Christine Bell’s tales are a perfect storm for my reading pleasure. One rather frisky sex scene between Stormy and her husband, Dev the Loony Duke of Leister, is the only thing keeping me from sharing this with my almost 12-year-old daughter, who would deeply appreciate the heroine’s bold as brass personality and contemporary sense of humor. Living in Victorian London, Stormy laments, “God, I missed Google.” I would, too, Stormy, I would, too.

Would you like FREE digital copies (epub or pdf) of Stormy’s tales? Just leave a comment and one lucky winner will be chosen at random on May 30.