I think one of the important features of science fiction has always been its ability to draw attention to injustice, to suggest better possible futures, warn us away from the paths we’re on, and to inspire new ideas — both social and technological.

My novel Stellarnet Rebel features an alien race called the Glin whose environment is devastated by Tikati invaders. Sure, it’s one of the common tropes in fiction. “Advanced technological power exploits/invades/destroys culture unable to defend itself.” You know it from Avatar, Star Trek, Babylon 5, Star Wars and many, many more.

You also know it from history. 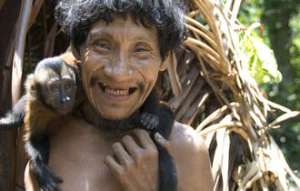 Unfortunately, there’s another real-world example happening right now, not in the distant past or imaginary future.

Brazil’s Awá tribe will face extinction unless more is done to protect their land rights, which are being abused by illegal loggers and cattle ranchers. Awá land within Brazil has been legally demarcated, but its boundaries are not respected. The Awá people have nowhere left to retreat. There are several accounts of them being killed. (Source: Survival International)

This entry was posted in News, Stellarnet Rebel, Stellarnet Series. Bookmark the permalink.