Bots and bulges at StellarCon 36

I spent the weekend at StellarCon 36,  a science fiction & fantasy convention in High Point, North Carolina. It was a fun three days, full of interesting people. 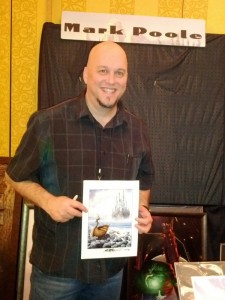 Mark Poole was the StellarCon artist guest of honor. He’s from South Carolina and illustrated more than 1000 cards for games such as Magic, White Wolf’s Vampire, Battletech, and World of Warcraft.

Here Mark’s holding an autographed print that is now in my possession.

Friday night, we were on the “Steampunk Artwork and Costuming” panel together, with Kelley Hightower and Markell Lynch from ConTemporal.

The panel consensus was that publishers aren’t going anywhere, regardless of the ease of self-publishing, because creating a successful, widely-read book requires more than just writing a book and uploading it to Amazon — it needs things like good cover art, ads, promotion, accounting, quality editing, branding, wide distribution, social media and other elements that are very difficult to achieve alone. 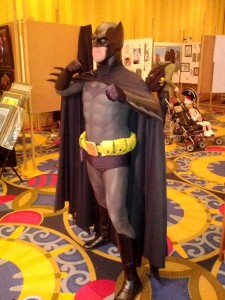 I met Batman and I got all twitterpated. I was kind of surprised at myself, because it’s not like I have a poster of him on my wall or anything. But I grew up watching reruns of the old Batman TV show and I loved the earlier Batman movies, so I guess there’s still some nostalgic squee in me.

After a long day in the dealer room promoting Stellarnet Rebel and peddling my jewelry, I had the honor of feeling completely exhausted and irrelevant on the “Dystopian Literature” panel at 9pm Saturday with uber distinguished guests Nicole Givens Kurtz (author, publisher, teacher), Tedd Roberts (scientist, writer, teacher, moderator) and StellarCon special writing guest Michael Z. Williamson (who I mixed up with Michael A. Stackpole, the other special writing guest, because I’m an idiot, so MZW I apologize).

My sum total contribution to the panel was, “Hi, I’m J.L. Hilton. I wrote a cyberpunk novel. The end.”

No, not really, but it felt that way. I think the most profound thing I had to offer was the suggestion that a defining characteristic of a dystopia was its inability to tolerate deviance. Also, that Stellarnet Rebel, while cyberpunk, did not have the “technology is dehumanizing” theme in many cyberpunk/dystopian novels. Rather, it portrays technology as the thing that brings people together and mobilizes them against injustice. 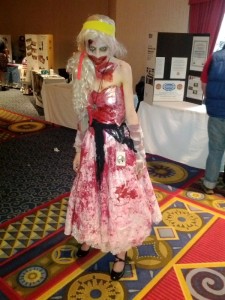 By late Saturday night, I was pretty much feeling like this zombie. But not as lively, clean or pretty. In my hotel room, my Sleep Number bed was haunted (and for the record, my sleep number is hyphen underscore, if anyone is wondering), the HVAC rattled all night, and the toilet paper rollers squealed like medieval torture devices rusted by the blood of a thousand heretics, waking my friend Lilith when I had to use them in the middle of the night.

Sunday, after a half a Xanax and abandoning the bed in favor of sleeping in the over-stuffed chair/ottoman combo, I was feeling … if not refreshed, at least a little less like an undead prom date. As the founder of Raleigh’s annual Can’t Stop the Serenity charity event, I represented Browncoat fans on the “Westerns in Space” panel, moderated by Karen McCullough. My fellow panelists were author/podcaster/historian Amy H. Sturgis, NYTimes best-selling author Michael A. Stackpole (who’s written Star Wars and Battletech books, among other things), and Albin Johnson, special StellarCon fan guest and founder of the 501st Legion. 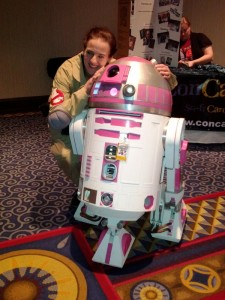 R2-KT was created by the R2 Builders after the death of Albin Johnson’s daughter Katie from brain cancer. It was her wish to have a pink version of R2-D2. R2-KT was inducted as an actual character in the Star Wars universe when she appeared in the series Clone Wars. Today, R2-KT travels the country to entertain children, raise awareness of pediatric cancer, and raise money for such charities as Make-A-Wish and Children’s Cancer Fund.

But more than that, I like the gunfights, the garb, the whore houses… y’know, all the tropes. I like the idea of the the outlaw or antihero, living on the edge, doing what’s right and/or doing what needs to be done, in spite of the rules or social conventions, or lack thereof.

Amy Sturgis used the term “unsung hero” and that strummed a chord in me. The “unsung hero” is one of the concepts at the very core of Stellarnet Rebel. The idea that someone does something heroic just because it’s the right thing to do. The person who makes hundreds of personal sacrifices, day in and day out, without praise or reward or big epic battles. And, maybe, beyond the rugged individualism, that is why I love westerns. 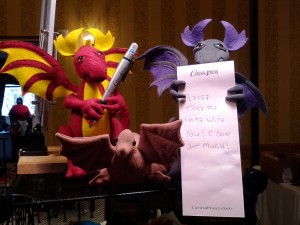 Thanks, Amy, for that epiphany. And thanks to everyone who made StellarCon 36 fantastic fun.

Other highlights of my StellarCon 36 experience included author Michael D’Ambrosio, who I met a couple years ago at NASFiC and who was so helpful to me during the process of finding Stellarnet Rebel a publisher. The guys from Firetower Studios were there — I met them in January at Illogicon and my kids love Jeremy Whitley‘s Princeless comics. I was introduced to the art of Mary Layton and met Kathryn Dickerson of the Sleeping Dragon, whose critters made use of my publisher’s swag.