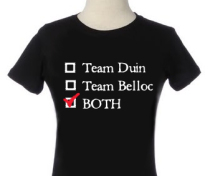 I love all of my characters, whether they’re heroes, villains, gamers, pub musicians or AI sims. But the two alien protagonists seem to divide readers into Team Duin or Team Belloc.

Duin is intelligent, eloquent, resourceful, and passionately devoted to the cause of liberating his people, the Glin, from their insidious Tikati oppressors. At only 40 years old, he’s considered an “elder” on his planet, and can fly a space ship, quote Shakespeare, construct an orrery, or entertain children will equal ease. Depending on which reader you ask, he’s either sexy, patriotic and paternal… or he’s a pedantic pain in the ass.

Belloc is a mysterious young outcast with uncanny abilities and a tragic past. My sister dubbed him “emo Glin” and declared herself the captain of his fan club before the book was ever published. He kicks ass and spouts romantic sentiments, and… GASP …quits playing his video game when the heroine needs him. Truly a fantasy male. Depending on which review you read, he either gets in the way and should have been shunted off into the sequel… or he’s the best part of Stellarnet Rebel.

Both characters interact with the heroine, Genny O’Riordan, and while there are romantic elements to the story, there’s also a lot of action, adventure, and computer geekery. My goal was to create an unconventional friendship between the characters in the midst of the plot — after all, the two of them are aliens, not bound by human conventions. But many readers still feel the need to take sides. It amazes me that I’ve created two very different personalities who evoke such strong reactions.

This entry was posted in On writing..., Science Fiction, Stellarnet Rebel, Stellarnet Series. Bookmark the permalink.