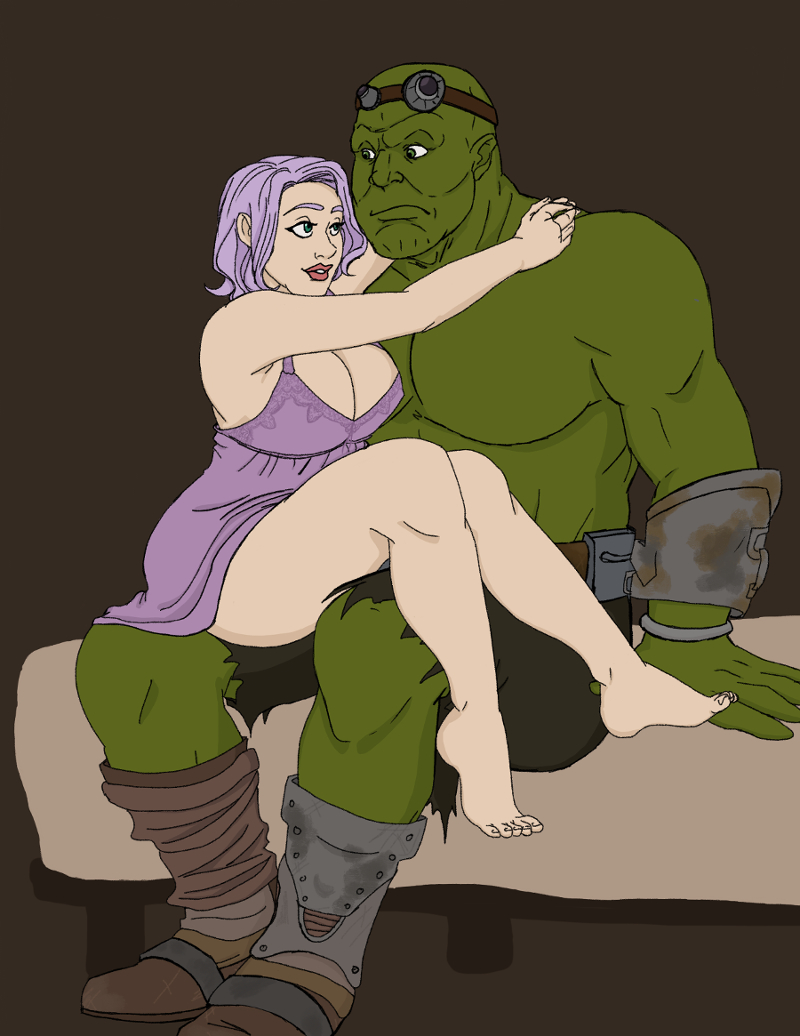 ADULTS ONLY. This is a steamy story about Lacy the Mojave courier and Marcus the mutant mayor of Jacobstown. Based on my playthrough of Fallout: New Vegas. Contains explicit sexual content, language and romance.

May also be read on AO3.

“I got your room ready,” said Marcus. “Cleaned it. Made the bed. Put a bucket of water and some towels on the table. Not saying you need to wash, just thought you might appreciate it.”

Lacy followed him along a wood-paneled hallway. His hunched shoulders spanned the width of the corridor and his head almost touched the ceiling. Lacy was a big woman, nearly 6-foot in her boots, but small compared to mutants.

He stopped at the last room on the right. “Well, good night. Sleep tight. Don’t let the radroaches bite.”

She entered the old hotel room and leaned her plasma rifle against the wall by the bed, dropped her pack, and unbuckled her gun belt. When she turned around, he was still in the doorway but stepped out of sight when she spotted him.

“I will miss you,” said her stealth suit in a soft voice when Lacy undressed.

She washed her face and hands, then wiped down with a wet towel. It always felt good to shake off the Mojave dust in the cool, mountain air.

Setting aside a glass of water to drink, she rinsed her underwear in the bucket, wrung them out and hung them on the bed post to dry. Then she slipped into a chemise she’d found in an abandoned house a few months back. It didn’t quite fit and her boobs were about to burst out of the bra cups, but she liked the satiny fabric against her skin.

She dug into her pack for a Sunset Sarsaparilla and heard a noise. Leaving the bottle unopened, she grabbed her pistol and tip-toed to the doorway.

“Do you need something?”

He turned around. “No, sorry. Didn’t mean to bother you.”

“Are you gonna stand here all night?”

“I might walk up and down the hall, keeping watch. Don’t mind me.”

Jacobstown was full of purple Nightkin and green-skinned mutants like Marcus. Well, not quite like Marcus. He had a higher intelligence than any mutant she’d ever known, and higher than most humans. But she’d been coming and going from the remote settlement for months, brought them supplies, helped them with a few problems, and though the residents could be a bit… unusual… at times, she felt safer here than anywhere in the Mojave.

“Is something going on?”

Something was definitely going on.

“Maybe you should come in and sit down.”

Lacy waved him into the room. He ducked under the door frame and sat on the couch. It creaked under his weight.

“You can go ahead and sleep.”

She returned her gun to its holster. “Not until you tell me what’s on your mind.”

He noticed her underwear on the bedpost and quickly lowered his gaze to the floor. “I, uh… I just want to make sure you’re safe and sound.”

She could do basic math, even if the numbers were green, and she added things up.

She stood between his knees, lifted his chin and looked into his gray eyes. “Do you want to touch me?”

“Like this?” She put his hand on her waist and guided it over the curve of her hip. Only the thin fabric of her nightgown separated his skin from hers.

“You’re so soft.” His voice sounded even deeper than usual. “And beautiful.”

“You obviously haven’t seen the girls at Gomorrah.”

Lacy removed his headset and goggles. “Good. Because I like you, too.”

Together, they unbuckled his wasteland armor and piled it on the couch. His scarred skin felt like thick leather stretched over muscles hard as rock. He seemed uncomfortable being touched but could leave anytime he wanted to. He obviously didn’t want to.

“Not everything about a mutant is huge,” he blurted out.

“Are you talking about your…”

He fidgeted and the couch creaked. “I just want you to know, if you’re curious. Now you don’t have to be curious.”

“So, you’re not packing a deathclaw dick?”

He chuckled, more of a grunt than a laugh. “You know, I went to a bar once that had one mounted on the wall. I don’t think it was real.”

Lacy slid the straps of her nightgown off her shoulders, exposing her breasts, and he stopped laughing. She pressed his rough, calloused hands to her chest and he moaned a long, low noise, like a growl, as he exhaled.

Lacy climbed onto his lap, wrapped her arms around his neck and kissed him. His lips were thick, like his skin, and dry. She wet them with her tongue.

He nuzzled her neck, inhaling deeply and sighing. “You smell good. You taste good. But I don’t know if I can… It’s been a long time.”

“No.” He hugged her closer and sadness softened his gravelly voice. “I’m just afraid I’ll disappoint you and you won’t come back. I want you to come back. But I don’t know why you’d want an old mutant like me.”

“I’ve been to every corner of the Mojave, met every kind of person there is. They all want something. Sex, chems, revenge, caps, power… But you’re different. You want a safe place for people with no where else to go and I lo–”

Lacy caught herself before she finished the word. Did she really love a mutant? Well, didn’t she always return to him, every chance she got? Didn’t she spend hours swapping stories with him? Patrolling the settlement? Finding the supplies he needed? Bringing him extra ammo? Risking cazadores and the Legion’s assassination squads to walk the long road into the forest? Jacobstown had begun to feel like home. He felt like home.

Marcus scowled even deeper than usual. She didn’t expect him to say it back. She didn’t know what she expected, really, but he kissed her and kept on kissing her, her ears, hair, neck, shoulders, breasts. He reached under her nightgown and grasped her bare ass.

She guided his hand between her legs and gasped when he inserted one thick finger. His thumb against her clit, she rode his hand to a climax, which didn’t take long. She clung to him until she caught her breath and the spasms ended.

He carried her across the room and laid her on the bed with her ass at the edge of the mattress, then dropped to his knees so his hips were level with hers as he pushed down his ragged shorts. Even semi-hard, his package would have been on the larger side of average, had he been human. Bigger than she expected, after what he’d said. It only seemed small compared to the rest of him.

With her feet against his shoulders, he grasped her thighs and rubbed against her pussy until he got hard enough. She was soaking wet and he went in easy, pounding harder and harder until the bed thumped against the wall and her plasma rifle fell over. He didn’t last any longer than she had. He throbbed inside of her as he made one final thrust and groaned as he came.

Breathing heavy, he leaned over her, careful not to crush her under his weight. “Are you all right? I didn’t hurt you?”

She asked for the damp towel and he handed it to her. He sat on the floor and watched her clean herself up, wrestle her boobs back into the chemise, and pick up her underwear from where they fell on the floor.

He uncapped the sarsaparilla with a flick of his thumbnail and handed her the bottle. She took a drink and offered it to him. He declined.

“You think this bed is big enough for both of us?”

He looked under the mattress. “I’d have to reinforce it with some tires or cinder blocks, if you wanted me to sleep here.”

“Better get busy then.”

He hitched up his britches. “I’ll be right back.”

Next time she returned to Jacobstown, Marcus had one of the bungalows fixed up for them. It took a few trips, but Lily Bowen helped her move all her things from Novac.

After securing independence for New Vegas, Lacy lived in the mountains with Marcus for the rest of their lives. More ghouls moved in, and a few more humans, and Jacobstown became a thriving place where everyone was welcome, so long as they tried to get along and didn’t stare at the Nightkin.

In FO2, Marcus makes a comment about not wanting to get a prostitute pregnant. According to online sources, game writer Chris Avellone intended the line to be a joke because mutants are sterile. Some players interpret the “sterile” lore as proof that mutants do not have sex. However, “sterile” does not necessarily mean “castrated” nor “impotent” nor “asexual.” It is very possible to be sterile – unable to make babies – and still be able to have intercourse and/or to desire sexual contact.

For this story, I’ve gone with the “sterile but sexual” interpretation of Marcus. Also, with his character being more intelligent than other mutants, I’ve given him thoughts and feelings that are closer to his human origins than the types of mutants players may know from FO4. Ultimately, it’s all headcanon anyway, so let’s just have fun with it! Thanks for reading!

This entry was posted in Free to read, Science Fiction, Video games and tagged Fanfiction, Video Games. Bookmark the permalink.