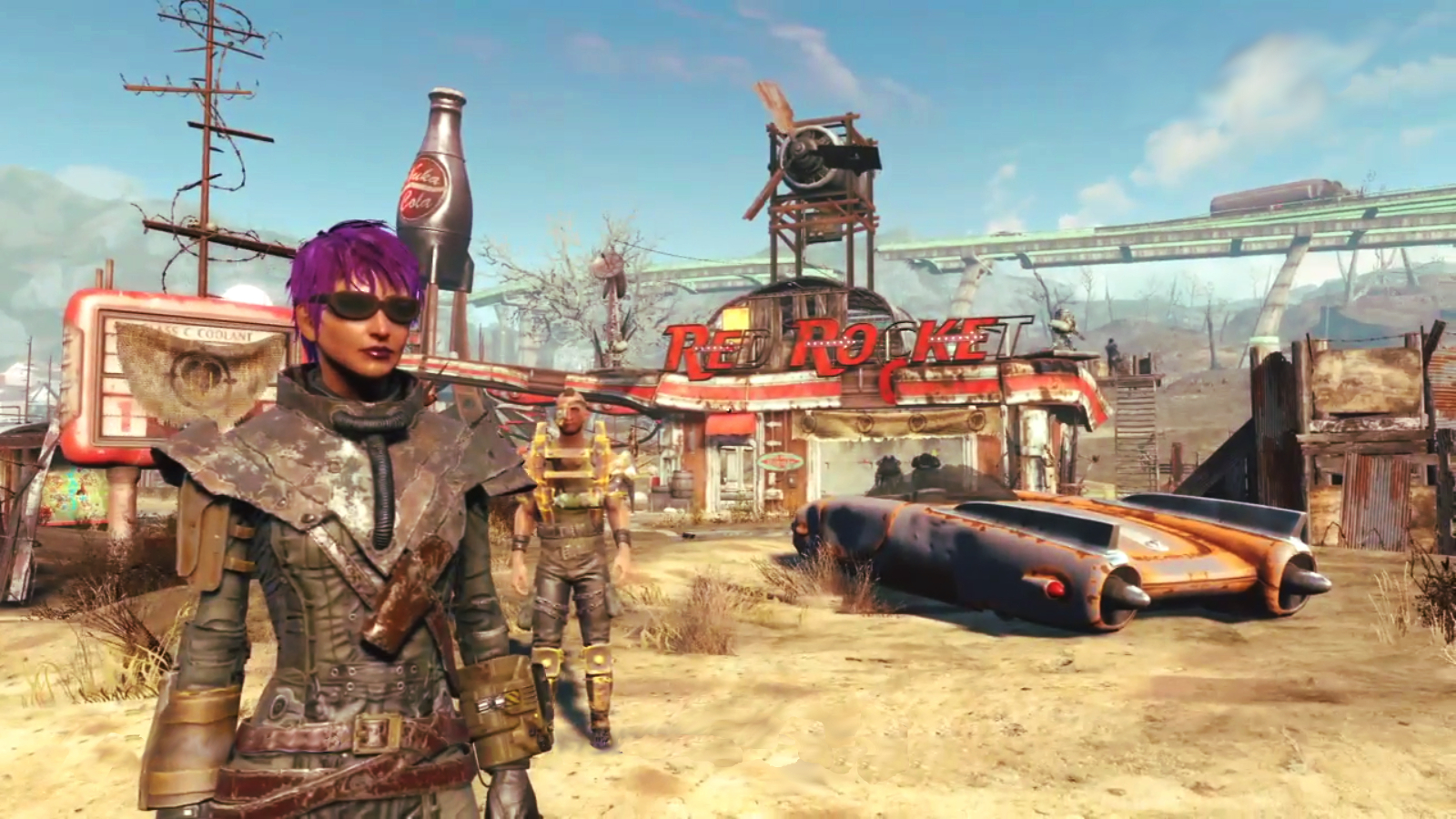 Rose is my second Sole Survivor, a melee build who became raider overboss in Fallout 4 at level 22. Today, I reached episode 111 of Rose’s journey on my Youtube channel, and a very special bonus video “111 Kisses” tells the story of Granny’s Kiss, her rocket-powered baseball bat.

But when I eventually made my way to the Institute in episode 78, I knew Rose had some important decisions to make. Role-playing is my favorite part of video games. As a writer with a vivid imagination — and a psych degree — I love the mental exercise of working out my characters’ motivations, envisioning how they would interact with other characters and react to situations in the game.

This story is about a crossroads where Rose must weigh the options of Fallout 4‘s main questline from the perspective of a reluctant raider overboss, rather than the heroic ghoul-loving perspective of my first Sole Survivor Fiona, general of the Minutemen.

What Rose decides here will set the path she follows throughout the rest of the game, and determine the fate of the wasteland.

Two Roads Diverged in a Wasteland

The Institute teleported Rose so close to Starlight Drive-In, she could smell vodka and hear Redeye singing in the distance. She headed down the broken pavement of the pre-war road, toward the lights of the outpost, and waved to the raider at the gate. He looked like he belonged in a morgue, not on guard duty.

“Ain’t nothing but hell around here.”

She hadn’t meant that in a good way, but she didn’t bother explaining. Fuck it. Scanning the half-assed shacks for a glimpse of Gage’s mohawk, she searched the scavenger’s shed, Python’s junk shop, and the chem cooker’s crash pad. Nobody talked to her, because nobody gave a shit. And she didn’t talk to them because she didn’t give a shit, either.

Nobody knew she’d been grifting the Brotherhood of Steel, sucking up to that puppy dog Danse and the big prig Elder Maxson so they’d build a molecular relay. Nobody asked why she was out alone, or wondered where she’d been the past two days while she was inside the most mysterious fucking headquarters in the Commonwealth, where her own son was the big boss of a high-tech gang that made mutants and synths.

And they wouldn’t believe her if she told them. They’d just laugh and offer her more chems.

Gage found her before she found him. “What the fuck are you doin’ here?”

That’s what passed for warm a welcome from her second-in-command. She turned around and met his eye. Just the one, because he wore a stupid-ass eyepatch that he didn’t really need but thought made him look mean or some shit.

She twirled Granny’s Kiss, her rocket-powered baseball bat, and placed the end of it against the welded bars of his armored chest. “Looking for you.”

Gage nodded at the big drive-in movie screen. “I was up top. Saw you come in. Also saw a big flash of light. What the hell was that?”

“I used the relay to get back, same way I got in.”

Rose headed up the stairs to their personal penthouse of burlap canopies and old furniture, high above the jet-heads and shitbirds. Gage followed. The platform above the movie screen gave them a 360-degree view of the wasteland. She could even see the Brotherhood’s militarized airship, the Prydwen, in the distance, floating above the old Boston airport.

“Nope, didn’t work. I turned into green goo and they replaced me with a synth.”

Gage scowled harder than usual. “I hope that’s a joke.”

She set Granny’s Kiss on the table and dropped onto the couch. The same couch where she’d fucked him two days ago, which had seemed like the thing to do before going off on a crazy suicide mission. “Would a synth know you have an 8-inch cock that only lasts five minutes?”

“And you’re bragging about that?”

“Best ten minutes of your life.” The scowl softened into a look of mild irritation. “Damn it, boss, you come strolling in here like you were just out picking hubflowers. I thought I’d never see you again. I was fixing to head back to Nuka World, hand everything over to the next asshole who made it through the gauntlet.”

He actually, sorta, sounded like he cared. Rose pulled a pack of fresh cigarettes from her pocket and lit one with a shiny gold lighter she’d boosted from an Institute egghead, and asked, “Still not interested in running the place yourself?”

“You know how I feel about that.”

“Yeah, you don’t like having a target on your back. I know.”

“You find out anything about your kid?”

She took a long drag and tapped the ashes on the metal floor. “I guess.”

“I didn’t exactly peg you as mother of the year, but I thought you might care a little more than that. You gonna just leave him there?”

“He’s not a kid any more. Turns out, they took him out of the vault years ago and he’s grown now, works for the Institute. That’s why they let me come and they let me go.”

It wasn’t exactly the truth, but close enough.

“Damn. Who was the kid with Kellogg?”

Rose shrugged. “Some other kid.” A synth version of younger Shaun, but she kept that to herself.

“We got the Brotherhood and the Institute trying to make the Commonwealth their own Cola Cars Arena. Just a matter of time before one of them starts breathing down our necks. I guess it’s too much to hope they wipe each other out and leave us alone.”

“Yeah, that’s the problem with having shit. Somebody always wants to take it away.”

Rose flicked her cigarette butt at the raiders below. “This lot can barely organize itself to clean latrines or go on a raid. They won’t withstand serious heat from the Brotherhood or the Institute.”

“We got an inside guy, though, right? Your kid?”

She shook her head. “I might be his mother but they raised him. He won’t help us.”

“Gunners won’t do jack shit but shoot us. Half of ’em probably signing up for the Brotherhood right now.”

“The Railroad hates both sides.”

“Crazy or not, if I thought we could use them, I would, but from what I’ve seen, they don’t have the resources to take a mutant camp, let alone an army of synths or a battalion of power-armored paladins.”

He leaned his hard ass against the railing and crossed his arms. “So, what do you suggest?”

“You left your family to be on the winning side. Would it be much of a stretch to leave Nuka World, too?”

“I ain’t joining the Institute. Fuck that.”

“Well, yeah, fuck that. No matter how clean and shiny it is – and it is very clean and very shiny – it’s fucked up. But what if I tip the odds in the Brotherhood’s favor? Give them some insider information about the Institute?”

“Seeing as you’ve been inside.”

“Exactly. So let’s join the Brotherhood. It’s just another gang, with better weapons and no chems. Isn’t that what you want? You’re always bitching at me whenever I use mentats or jet.”

“I’m not very good at behaving myself or taking orders. That’s why I never joined the Gunners. Well, that, and I don’t get hard for assaultrons.”

“You don’t seem to mind doing what I tell you.”

“Because when you tell me to do something, it makes sense. And if it don’t, I let you know.”

Or you grab the next sap who survives the gauntlet and help him kill me.

Rose had no illusions that Gage loved her or that his loyalty would last any longer than her usefulness. She decided it would be best, for now, to go on playing all sides and see what panned out. When and if the time came to jump ship, with or without Gage, she’d be ready. She’d survive.