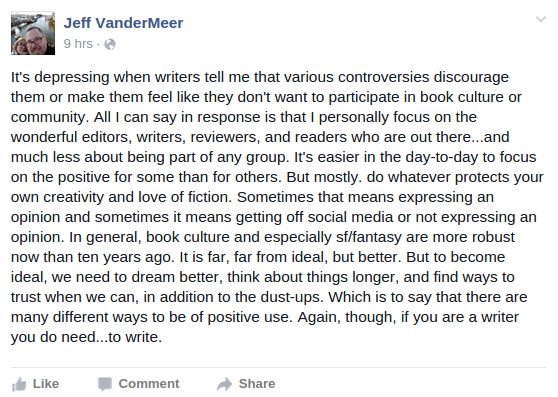 I’ve been a writer for a long, long time. DRAGON magazine published my short story, “The Visitor,” in 1988. I was 17. Shortly after that, I worked for a treasure hunting magazine, writing articles and book reviews. A few years later, I became a newspaper reporter and columnist, and I’ve spent most of my writing career in non-fiction.

I didn’t become a published science fiction novelist until 2012. Giddy with my new membership in the OMG I’M A REAL SF AUTHOR club, I attended conventions, appeared on several panels, sometimes with awesome people, sometimes with awful people. I gave away swag, sat in author alleys and had conversations – some positive or supportive, others not so much – and I experienced some strange bias in the SF community against things like technology, anime, YA, cosplay, but even stranger the bias against women. Some people assumed I’d never read Heinlein, Asimov or Bradbury. They assumed my books were all sex and no science, or strictly “soft” science fiction (which couldn’t be further from the truth). They assumed I’m self-published (I’m not).

I received good and bad reviews, mostly good. I answered email from excited fans and aspiring authors, became the target of jealousy and bitterness from others. I lost friends. I gained friends. I won one award and became a finalist for another. I blogged. I guest blogged. I joined various author groups and met a lot of authors. I attended seminars offered by my publisher to teach me about how to use social media, how to create an author website, how to be a brand. I joined SFWA. I left SFWA.

I published a second novel, and began working on a third. But I felt overwhelmed. I suffered several physical health issues, as well as debilitating anxiety, panic attacks, and depression. I went to lots of doctors. I went into therapy. I took medication.

I stopped writing because I loathed writing, save for a few interviews, columns and blog posts, here and there, which were mostly journalism not fiction. I even stopped reading, because I loathed books. The last thing I read was Rat Queens, which is a comic, not a novel. I played Skyrim and Fallout because they were wonderful stories but not novels. I didn’t entirely stop doing conventions, but I only did a few, where I felt comfortable, and I focused on my jewelry design business instead, which had been thriving but put on hold when I became a novelist.

I’m not saying all this for sympathy or to make any particular point. I’m not one of those writers to which Jeff VanderMeer refers. I’ve never told him the story of my discouragement. But I am discouraged. He is right that there are good people out there. I love my editor, Alison Dasho, without her I would never have been published at all, nor finished the sequel. I love my first editors, Eileen Brady and Linda Cashdan, who helped me develop a novel that someone wanted to publish. Bull Spec founder and editor Samuel Montgomery-Blinn is one of the nicest people I’ve ever met, and there are so many authors who’ve been supportive along the way. Bill Harms, Richard Dansky, John G. Hemry, Christiana Ellis, Sara Harvey, Natania Barron, Robert Appleton, Kait Gamble, M. David Blake, Michael D’Ambrosio and more.

But I had to take a serious step away from the industry and the community, get healthy, figure out what to do next, and how I wanted to do it. Writers are expected to do so much more than write, nowadays, and I’m really no good at all the other crap. I don’t even feel particularly good about the writing part. I feel as if I learned to swim in a kiddy pool and then someone dropped me into the middle of the ocean. And writing–actually sitting down and writing–is such an isolated pursuit. Some writers love that loneliness. Me, not so much.

I still occasionally receive emails asking when the 3rd Stellarnet book will be out (though they are vastly outnumbered by the emails asking when I’ll write more Skyrim smut). And I do want to write again. But I’m having a hard time holding onto the good bits, because everything seems coated in slime. That’s on me, I know. Maybe I’ll figure it out someday.