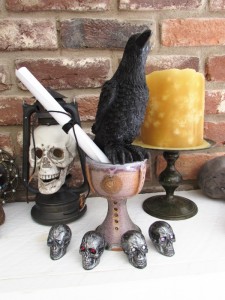 Upon Samhain time, so the Druids told,
When doors opened wide to the Otherworld,
The fey folk, sprites, elves, banshees and trolls,
The dear departed and the wandering souls,
Sightless spirits, ghouls, imps and wights,
Entered the mortal realm for just one night.
Though few will remember, and fewer believe,
And we now call this time of the year Halloween,
There’s still ancient magic upon the air
And a mystery awaits you, if you dare!

I love anything like a treasure hunt, whether it’s easter eggs, trick-or-treating, or Goonies. One of my first paid writing gigs came courtesy of Lost Treasure magazine, where I interviewed people who found old buttons and coins with metal detectors. I even wrote a Firefly fanfic script that involved a search for hidden treasure.

The promise of gold or rare relics is not the only allure of treasure hunting, but the seeking, puzzle solving and adventure. I’d been wanting to do a treasure hunt with my kids, ages 10 and 14, something along the lines of the 1980 movie Midnight Madness, so I began gathering materials and ideas about a year ago. The Quest recently inspired me to follow through with my plans and I spent the month of September putting everything together.

Our own quest began this morning with a jeweled scroll case (spray-painted candy tin covered with plastic jewels) containing one scroll with the poem at the top of this blog, two ball-chain necklaces, and a coded message. I suggested they go to the imps to break the code.

The “imps” were a memory game where each card featured either a fairy letter or an alphabet letter drawn in the corner. Matching the pictures paired them up for deciphering the note, which read:

Pooka,
I have taken the human child to Avalon. If we can keep it hidden away until sunset then it will be trapped with us forever!
Sylph

For completing the task, they were rewarded with two tiny “imp” skull charms. Then they looked up Avalon on the computer and discovered that “Avalon” means “apple land” so they decided to search around the apple tree in our front yard.

They found Sylph in the tree, but not the child. Instead, they discovered an Irish tin whistle and a small container with two sparkling star charms, which they added to their necklaces, and three slips of paper. The slips showed finger hole positions and music notes, but they had to figure out what order to play the three pieces of music.

When they played the tune correctly, the air spirit agreed to answer one question. My oldest daughter asked, “Where’s the baby?” Sylph told them that the baby had been given to the Banshee.

They went to the “Banshee,” a motion activated Halloween decoration in the house, and found her puzzle. To discover the words to the puzzle, they had to find 13 black tears — which were faceted black glass teardrop beads from Michael’s craft store.

For every tear, they were given a word to find in the word search, and after finding all 13 tears and all 13 words, the remaining letters spelled out: FIND THE GOLD SKULLS. They were rewarded with two tears for their necklaces.

The golden skulls were little plastic skulls with the bottoms removed and spray painted with gold paint. Three were filled with small candies, but the fourth contained two tiny brass charms, each attached to slips of paper with braille messages.

They looked up the braille alphabet online and deciphered the messages: “The blind giant has the baby” and “His eyes glow in the dark.”

My 14-year-old said, “The darkest place in the house is the bathroom. That’s where we always test things that glow in the dark.” It’s also where we sometimes play with sparking Wint-o-green Lifesavers.

They found the eyes and had to return them to the “giant” by tossing or bouncing the balls through the eye holes of a large face drawn on cardboard. He rewarded them with eye charms. 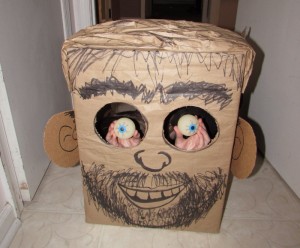 The giant told the girls that a gnome had taken the baby.  There are several gnomes in our home, but when they went to the yard gnome in our front garden, they found the Gnome’s Puzzle.

After solving that and earning charms, the gnome told them that Pooka himself had come for the child and taken her away, but had left behind a clue: A folding toy with pictures of Pooka’s various shapeshifting forms: a black horse, black bird and black spider. I’d created this by modding the puzzle found at this link.

They went to the fireplace, over which hung a large black spider and upon the mantle sat a black bird. From the spider’s leg hung a small cage containing a tiny baby made by Lori Hehn.

To unlock the cage, they had to solve the fairy logic puzzle* and figure out which of four silver skulls contained the keys.

But that wasn’t the end! Oh, no! After rescuing the baby, Pooka told them that a changeling had been left in the human world, and they would have to find her or she’d be trapped forever in the human realm.

They followed a series of clues and discovered the changeling, made by Dinky Darlings, then returned the baby to its cradle and the changeling to its cage. 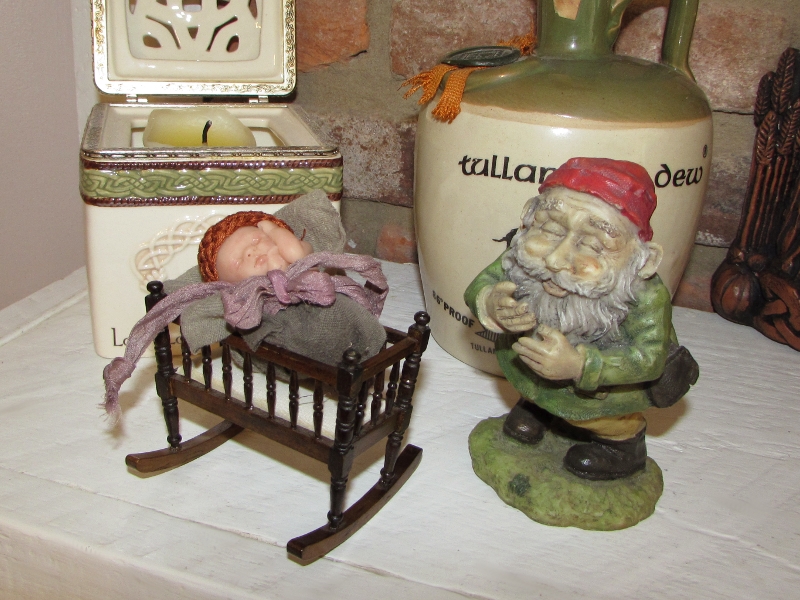 Baby back in her cradle, safe and sound. 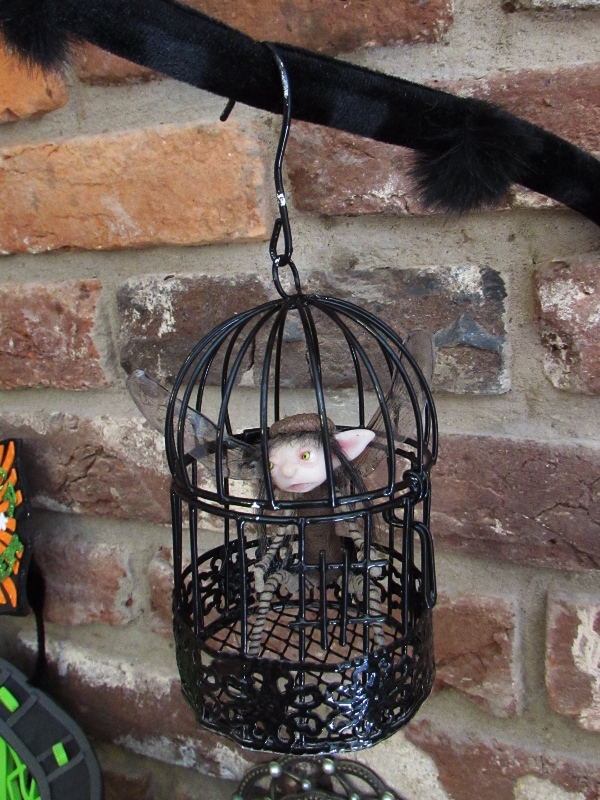 The naught fairy changeling back in her cage 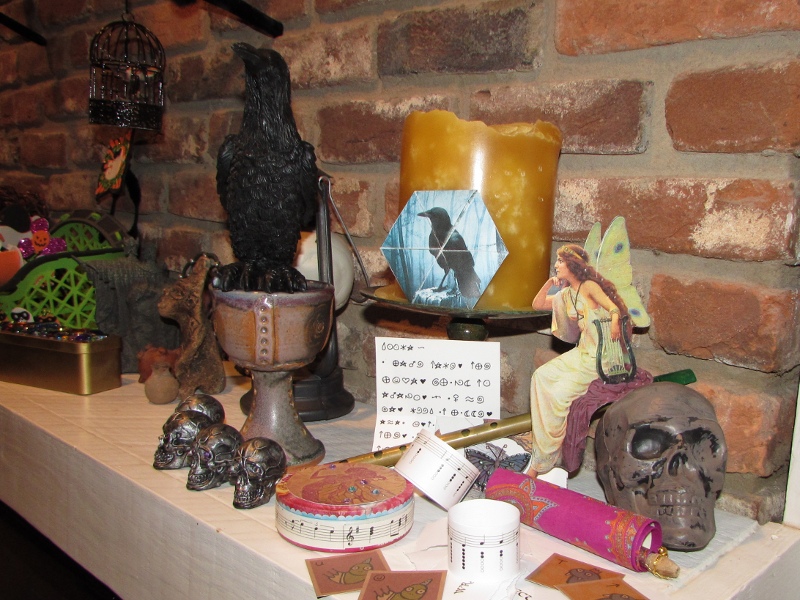 Many of the goodies, props and puzzles used during the story. 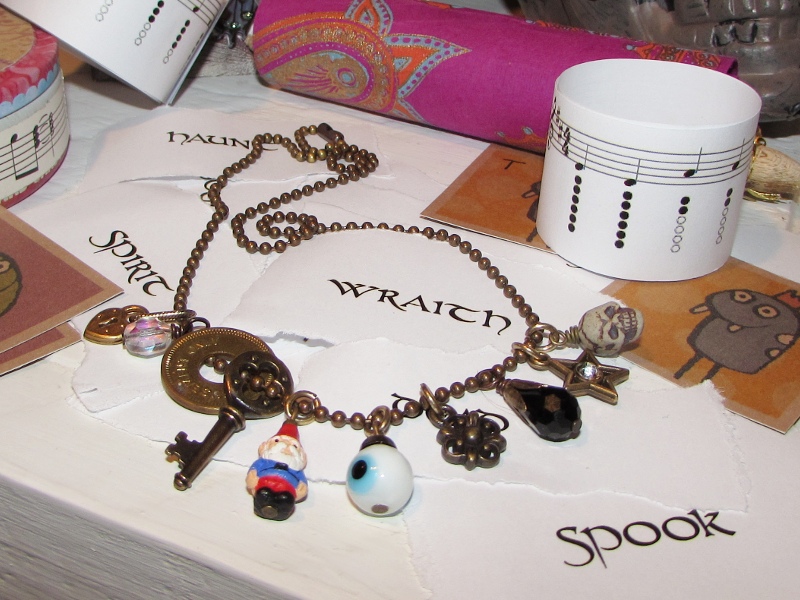 The completed charm necklace at the end of the treasure hunt.

* Fairy Logic Puzzle (pdf) Note: This is not filled in. You would need to write “key, gem, candy, coin, sprite, pixie, brownie and gnome” down the left side, and “amethyst, aquamarine, ruby diamond, sprite, pixie, brownie and gnome” across the top, to do it exactly the way I did. But I left it blank in case you wanted to fill it in with your own variations. Just substitute the words in the clues accordingly.