Heroism happens in all genders

The original version of the shirt...

I believe these genres are at their best when they are used for exploring possibilities and questioning our social, moral and scientific limitations.

Unfortunately, they can also be used to promote the status quo. Check out:

“Training to be Batman’s wife” T-shirt.

“Future Man of Steel” vs. “I Only Date Heroes” clothing for babies.

Items like these are based on the idea that women and girls aren’t heroic, they’re the hero’s reward. Some people dismiss these types of messages as harmless because characters, comics, books and movies aren’t real. But the sentiment exists in the real world, too. Over a year ago, I wrote about the heroism book I found in a children’s toy store, with zero women in its pages. 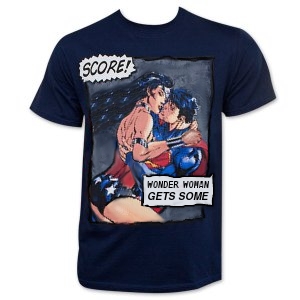 ... and my alternate version.

Women are so much more than prizes to be won or objects to be “scored.” But this one-sided viewpoint will remain very real, so long as our stories and T-shirts teach these messages.

I value heroism in all genders, which is why I loved the recent ABC show The Quest. Unlike most reality TV, it didn’t foster backstabbing, pettiness and superficial qualities, but instead focused on selflessness, hard work and heroism.

The program featured seven women and five men who were put into a fantasy setting and tasked with rescuing a kingdom. The Quest proved that women could indeed be physically successful in battle, riding horses and using weapons. But completing a quest and being a hero isn’t just about brute strength. Heroism required other qualities such as tenacity, heart, sacrifice, character and integrity, as well as dexterity, intelligence, wisdom and charisma (though any RPG player could have told you that).