To boldly smooch where we haven’t smooched before

We recently passed the 45th anniversary of the first scripted interracial kiss between a white man and a black woman on American television in the Star Trek episode “Plato’s Stepchildren.” The episode aired to U.S. audiences on November 22, 1968. 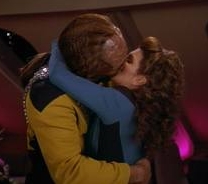 J-E-A-L-O-U-S-Y is the only negative feeling I have about this black actor kissing a white actress.

The Uhura/Kirk kiss is the one everyone remembers because it occurred during the Civil Rights Movement, in the wake of Loving v. Virginia, a landmark civil rights decision of the U.S. Supreme Court that invalidated laws prohibiting interracial marriage.

There’s been a lot of discussion the past couple years about the difficulty readers have relating to alien lovers. Vampires, angels, werewolves and ghosts, no problem, but heck no lizard skin or tentacles. 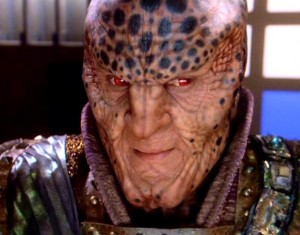 Personally, I would much rather go on a date with Ambassador G’kar or Gul Dukat than Tom Hiddleston or Matt Damon. As I’ve said before, I think it goes back to my favorite fairy tale, Beauty and the Beast. When you look like a beast, you must earn love with your personality – bravery, wit, charisma, humor, actions – and not just your appearance. When someone has a monstrous or alien visage, we are forced to see his true self without the distraction of superficial attractiveness. When someone is bold, suave, noble, eloquent, shy or lonely, it makes his personality and emotion even more vivid in stark contrast to the inhuman appearance.