A valentine to my editor 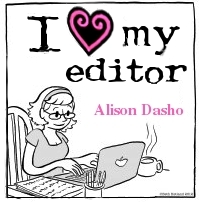 This short story featuring Belloc from my Stellarnet books is a special valentine for my former editor, Alison Dasho. You can read other tales written for her by my fellow Carina Press authors Diane Dooley, Veronica Scott, Darcy Daniel, R.L. Naquin and Shawna Thomas. All of them include characters she helped us bring to life.

Alison awoke to the sound of a sultry male voice that might have been called a “crooner” in another century. A voice that didn’t sound at all like Kermit the Frog. But, when she opened her eyes, the singer did look a bit frog-like—a painfully handsome, humanoid version of a blue dart frog, with a pale face and sapphire skin on the back half of his head, neck and body.

He moved with a dancer’s grace, slender but powerful, as he stood over her and leaned close. Large, glistening irises made his eyes look like dark, polished pebbles, with only the slightest bit of white in the corners. Yet even that alien characteristic was somehow appealing, giving him a wide-eyed look of gentle innocence. A fantasy author would describe him as elven, if he’d had pointed ears. But the aliens known as Glin had no visible pinna, only slits on both sides of the head.

Her throat felt thick and sore when she swallowed, but she managed to whisper. “’Lo, Belloc. ‘Sup?” She tried not to stare at the chiseled pectorals that drew her gaze past his unbuttoned collar, but averted her eyes to the floral patterns shimmering in the digital threads of his programmable shirt.

“Nik told me you were here, in the IRL med-block.” He glanced at the numbers and lights that covered the wall at the head of her bed—information provided by the nano-sensors attached to her skin or injected into her body. “Dr. Geber says you’re doing well.”

“Epic.” Alison croaked the word and cleared her throat.

“Your technomage missed the subzero expedition.” He referred to her incarnation in the popular MMO Mysteria.

“No problem. You can watch the vid of our playthrough. We found the remnants of a secret civilization and several psionic weapons.”

A pair of gloves covered his webbed hands and extended to his elbows, alight with interactive Net icons on his forearms. He touched the controls on his cuffs and a corresponding window opened upon the wall, covering most of the medical apps.

“Were you watching something when I woke up?”

His hairless brows puckered over his eyes. “No.”

Belloc sat on the edge of her bed and hung his head in awkward reticence. She’s the one who felt awkward, with her thin antibiotic hospital gown, bed head and raspy voice. She probably had bad breath, too. Ugh.

“I was trying to sing you well. The Glin do that.”

“Are you thirsty?” He offered her a plastic bottle. “Duin thought you might need this.”

She accepted the gift and felt something slosh inside the container. “What is it?”

“From Glin.” His people used the same word for their planet as themselves, as they considered one inseparable from the other.

“Are there flowers to go in it or something?”

“The floral block might have a few of those blue roses left over from the wedding.”

The wedding. The very first wedding between an alien—Belloc—and a human—interstellar blogger Genevieve O’Riordan. Their marriage took place right here in Asteria Colony.

A corner of his mouth curled up in a shy half-smile. But he inhaled a deep breath and sang in a low, gurgling language that washed her aches away. Alison didn’t understand a word, but she appreciated the beauty of Glinnish—and the Glin beside her. While he sang, she drank the water. With each note, and each sip, she felt better and better.

Dr. Geber entered, waving a stylus that manipulated the stats on the wall. “What happened?”

Belloc stopped singing and stepped away from the bed, pivoting on one foot and swirling out of the doctor’s way. “Should I go?”

“I think there’s something wrong with the sensors.”

“I messed them up.” Belloc touched his glove and the Mysteria vid disappeared from the wall.

“It’s not you. She just suddenly… reset, back to her pre-op stats.”

Alison sat up, rubbing a hand through her hair, though it probably only made things worse. “But, I’m supposed to get better, right? That’s the whole reason I’m here.”

“Well, yes, but no.” Dr. Geber’s fingers wiggled in the air, shrinking and enlarging items on the wall, and flicking through several menus. “Not so quickly.”

She stretched her arms, tentatively twisted her torso, and realized that she felt pretty damn good. “I feel like I could fight a whole army of steam trolls.” She smiled at Belloc. “I guess your singing worked.”

He smiled back. “I’ll tell Hax to add another power to my mist wraith. Siren song healing bonus, plus ten.”

Alison drank the last of the water and returned the bottle to Belloc.