This interview originally appeared November 12, 2012, on the Galaxy Express.

The Galaxy Express: Name up to three experiences in your life that influenced your decision to become a writer.

J.L. Hilton: I could read and write before I entered kindergarten, and I made storybooks full of pictures before that. I was in second grade when I had to make a book for class. We made covers out of cardboard, filled the inside with lined paper, and I filled mine with a story about Princess Leia. In 3rd grade, I wrote horror stories with my classmates as characters. I won writing awards in elementary and junior high school, and had my first fantasy short story published in Dragon magazine by the age of 18. So, I don’t recall there being a decision process involved. I’ve been telling stories for as long as I can remember.

TGE: What about science fiction romance appeals to you?

JLH: I know this isn’t part of the question, but I just want to take a moment to say that I’m uncomfortable with the distinction made between “science fiction” and “science fiction romance.” I understand why it’s there, and the “Happily Ever After” being the main defining element, but…

Star Trek has tons of romance. In Firefly, Babylon 5 or Battlestar Gallactica, there are relationships galore. Love motivates the characters, just as it motivates all of us IRL. “Love keeps her flying,” as Malcolm Reynolds says. So why are those not called romances? Sometimes I get the feeling that some people see romance as a lesser “soft” thing not worthy of being a part of “real” science fiction, and I don’t agree with that. 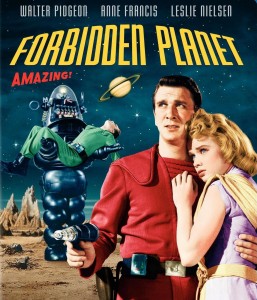 The other day I watched Forbidden Planet from 1956. If that were written as a novel, exactly as it plays out on the screen, it would be so SFR it’s not even funny. Hero meets heroine on a distant planet, they must overcome obstacles to be together, and they end the movie in each other’s arms. It’s a romance!

Anyway, back to the original question… Like any speculative genre, sci-fi is great for “what if?” Navigating a relationship is hard enough in the real world between two humans. But what if it’s a human and an alien whose cultures and bodies don’t quite match up? How does love persist in spite of their differences and in spite of the challenges of technology, social prejudice or interplanetary war? Those things fascinate me. I think that fiction is a beautiful way to write about real feelings and human truths.

TGE: Without going into spoilers, who are the movers and shakers in your Stellarnet universe?

JLH: The main characters are Genevieve “J’ni” O’Riordan, a human interstellar news blogger with a fierce desire to expose fraud and injustice, Duin the alien rebel and gun-running revolutionary (turned UN ambassador in book two), and Belloc, a mysterious alien with a secret identity that could destroy their relationship and start a civil war on his home world, Glin.

There’s also Seth, J’ni’s xenophobic ex; Hax, a tech guru and game developer with a hacktivist bent; Blaze, the “Colonel Badass” military leader of the UN troops in Asteria Colony; and Aileen, owner of the only extrasolar Irish pub.

TGE: I thought that STELLARNET REBEL had a strong first contact theme. Does STELLARNET PRINCE explore that theme further or go in a different direction?

JLH: STELLARNET REBEL is set about ten years after scientists discover sentient life on other planets and several years after making first contact. But there are many people on Earth who still don’t believe it (just as there are some today who don’t believe we landed on the moon). Some humans, such as J’ni’s parents, are angry because it challenges their belief in being the center of God’s universe and His only creation, so they say the aliens are demonic. Some insist they’re a hoax. Others, like her ex Seth, are just scared and/or prejudiced against non-humans. They think the aliens will bring incurable diseases and other horrors.

In STELLARNET PRINCE, Duin and Belloc become the first aliens to set foot on Earth. Reactions range from worship to death threats, and everything in between. Then there’s that awkward meeting with J’ni’s parents. I think most of us can relate to that, even if we’re not aliens.

I wanted to do something a little different with the aliens in my books. In a lot of science fiction, aliens are an all-or-nothing situation. Firefly, Blade Runner and Gattaca, for instance, have no aliens. Star Wars, Babylon 5 and Star Trek have aliens everywhere and it’s no big deal. No one thinks twice about Dax and Worf, a Trill and a Klingon, getting together in DS9, or Delenn and Sheridan marrying in B5.

But in the Stellarnet Series, aliens are a big deal. The romance between human and Glin is a “first contact” of a very literal kind – the first ever in the history of everything. That has repercussions that are felt throughout books one and two, and into book three, which I’m writing now.

TGE: Heroine Genevieve O’Riordan is a blogger. What can you tell us about the type of blogging she does?

JLH: She is a news blogger. It’s like being a reporter, but in a future where newspapers and magazines no longer exist as we know them now. Everything is digital. News isn’t reported when the paper arrives on your doorstep or when you turn on the TV at 10pm. News is reported constantly, and the public is as interested in the personality doing the reporting as it is in the news being reported.

Blogs, videos and social media are not separate as we think of them – Facebook, Tumblr, Twitter, Blogger, etc – but are all aspects of one Net, one cohesive system, to which everyone is constantly connected through personal devices. J’ni is her own cameraperson, editor and news anchor – posting videos, articles, headlines and updates in real time, as things happen. There’s little to no line between her professional and her private life.

She operates under the auspices of Interstellar News Corps, a huge media corporation. In STELLARNET REBEL, INC sends her to Asteria Colony, the first human settlement outside of the Solar System. There, she meets Duin, who is trying to get someone, anyone, to listen to what’s happening on his nearby planet. Invaders imprisoned his family, destroyed his village and are stealing water from lakes and rivers. He doesn’t know why. As their relationship goes from professional to romantic, J’ni goes from obscurity to Net celebrity, through the course of the series.

TGE: Duin and Belloc are alien heroes. How are they different from other alien heroes in science fiction romance?

JLH: Their race, the Glin, is androgynous until puberty and they don’t have the same male/female power issues as we do. Both sexes care for offspring, hunt, gather, make tools, learn, teach, or whatever. Both can be Truth Tellers or Elders.

Duin loves children and loves to sew. Belloc is a musician. Duin and Belloc are both very emotional. Glin don’t cry tears like humans. Instead, they have a membrane that thickens and turns white over their eyes when they are sad. They get white-eyed frequently throughout the story and aren’t ashamed of it.

I love flawed heroes and anti-heroes, so there’s that, too. Duin is pyrophobic, talks too much, tends to self-righteousness, and overestimates himself and others. He is optimistic and ebullient to the point of annoying, though his heart’s in the right place. Belloc is shy and reticent, self-loathing, outcast, secretive and overly sensitive. My sister calls him “emo Glin.” The story is not just about how they relate to J’ni, but how they relate to each other. Each learns a lot from the other throughout the series.

TGE: STELLARNET PRINCE promises lots of political and social unrest. Where do you hope to take this series and what kind of adventures can readers expect?

JLH: STELLARNET REBEL is a love story set against the backdrop of larger issues involving freedom, environmental destruction, bigotry and technology. In STELLARNET PRINCE, there’s still a love story, but the scope of the whole story expands. Our heroes leave the remote, isolated Asteria Colony to visit an overpopulated Earth and a vulnerable Glin.

Characters from the first book – J.T., Nish, Eb and Brendan – take on a greater role in the sequel, and new characters are introduced. Two of my favorites are the U.S. president and an alien translator who ends up in the wrong place at the wrong time. Duin’s cherished beliefs and unwavering confidence are challenged. Belloc longs to leave his past behind and forge a new future for himself. J’ni has to deal with the costs of celebrity and loyalty to her alien family.

I’m working on book three, which will continue all of the plot threads I’ve mentioned. I’d like to visit the planet Tikat, the home world of Duin’s enemies, and bring back the Finders from book one, as well as introducing new characters, new technology and new personal and planet-wide challenges for the heroes.

TGE: Silly question time! If you could create a Halloween costume based on any character from your universe, who would it be?

JLH: I’d love to see someone dress up as a Glin, but that would probably require Hollywood-level makeup skills. The Glin are humanoid, but bald, no ears, and large irises, with very little white in their eyes. They have what is called countershading – light on one side of their bodies and dark on the other. Many aquatic and land animals have this on Earth, too. It’s a kind of natural camouflage. If not a Glin, seeing someone with J’ni’s viridian hair, cute little dresses, big boots and cyberpunk bracers would be sweet.