This interview originally appeared on the Contact – Infinite Futures SF blog on December 2, 2012. 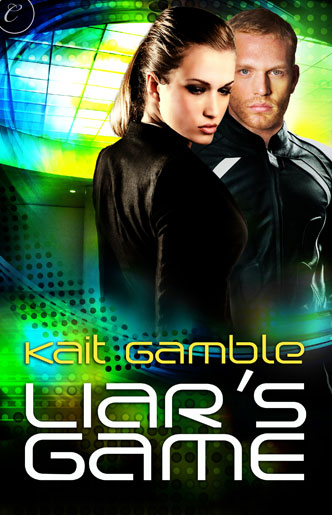 I recently read Liar’s Game by Kait Gamble, published by Carina Press. It’s a novella about a rag-tag crew of former prison inmates who are presumed dead and want it to remain that way. As a result, they’re stuck living in space, scrounging to survive. A bit like Firefly, they find a stowaway on board, and the plot revolves around the discovery of who she is and what she’s up to.

Kait Gamble was born and raised in the Pacific Northwest and started writing to entertain herself during the long winters as a child. She now lives in England. Visit her at KaitGamble.com.

Kait was nice enough to chat with me about Liar’s Game last week.

J.L.H.: Are you a fan of Firefly? Liar’s Game had a similar feel.

K.G.: Yes, I’m a huge fan of Firefly! I loved the series and the characters. When I started writing Liar’s Game I hadn’t watched it in about two years and it didn’t really dawn on me that I was writing something similar until I started watching them again with my daughter. But the themes of friendship and trust along with adventure are things that I always have at the back of my mind when I write.

J.L.H.: OK, six years on a ship with those awesome men, and no hanky panky? It did say six years, right? Aurelia must have had a lot of batteries.

LOL! I pictured her being like me when I was growing up. I hung out with a group of platonic guy friends who treated me like a little sister all through elementary and high school. We watched each other’s backs and went through all kinds of insane adventures but there was never a hint of anything more, though we would have probably given up limbs for one another if it came down to it.

J.L.H.: This book felt like a sequel to me. Did I miss something? Is there a previous book? Or are you just that good at creating a back story and camaraderie between the characters?

K.G.: Nope not a sequel. I like to think of it as a taster. A prequel. The camaraderie was easy to write as I just imagined my younger self with my friends. Though none of us was a cyborg or a mad scientist, sadly.

J.L.H.: You were a mad scientist… on the inside. Will there be more books about the crew of Euchronia?

Yes, I’m writing more in the series now. I plan follow the crew and tell the story of each of the crew members resolving their pasts and hopefully finding them someone to love.

J.L.H.: Is Keys the type of guy you’d go for IRL? He’s similar to Belloc (in my Stellarnet Series), the knight in shining armor type. But really, if it were me, I’d be with Duin — or in your book, probably Everhard (despite his faults) or if were younger, Bam.

I have gone for his type in the past and it’s a great fantasy but the knight in shining armour isn’t what I look for now. I can take care of myself, thank you very much. But it’s tough to say. I would probably go for Everhard because of his sense of humour, he’s smart and he’s fine to look at. Bam always cracks me up which is a plus. I’m drawn to Meri’s brains but he’s a bit too old for me. Maybe I should write a combination of them all lol!

I’m falling for Duin in Stellarnet BTW. It’s still early in the book but he stands for his beliefs and won’t back down. How could you not love a guy like that?

J.L.H.: Readers tend to like Belloc, but as you said, I can take care of myself, thanks, so Duin is my favorite. He’s a mature character who has serious goals beyond falling in love and protecting the heroine, and he respects and relies on her ability to take care of herself.

But speaking of lovable characters… Poor, oil-stinky Bam! Was he meant to be a steampunk-ish character or a cyborg? I saw him more as a cyborg, but some reviewers of your book seemed to think he was steampunk, and that there were steampunk elements to your story. Yes? No?

When I started writing Liar’s Game it was meant to be steampunk and you can still see some elements in it (ie. All the Queen Victorias that have reigned). Bam was definitely meant to have steampunkish style prosthetics. He’s evolved somewhat into a ramshackle cyborg since he’s put together with scraps and whatever else Meri can bang together.

J.L.H.: Well, I thoroughly enjoyed Liar’s Game and I can’t wait to read more. It kept me guessing, and it really wasn’t a SFR — it was science fiction with a heroine and romantic elements. Which I love.

Thanks, Kait, for taking the time to chat!

This entry was posted in On writing..., Q&A, Romance, Science Fiction, Visiting authors. Bookmark the permalink.