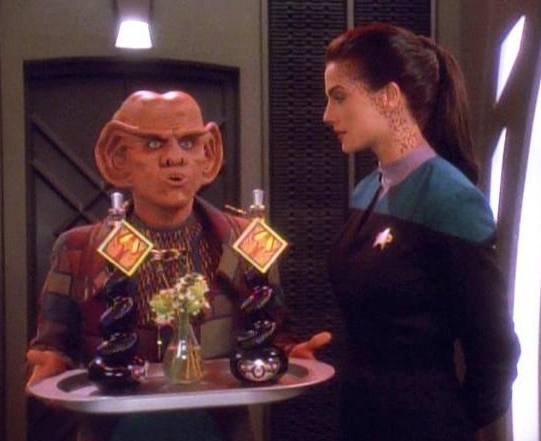 I recently scored not one but TWO bottles that look like Cardassian kanar, for only $12 on eBay.

I’ve seen single bottles going for $50 or more if labeled “Star Trek,” even if they were never used as screen props in Deep Space Nine. Targeting Trekkies ups the bidding war, I guess. Just as labeling watch parts “steampunk” makes a single gear go for $5 when you can get an entire box of “watchmakers parts” or “grandpa’s broken junk” for only $15. 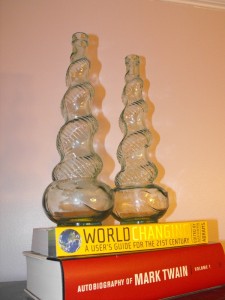 My Cardassian “kanar” bottles. Made in Spain.

There’s something super fun about props. I think it goes back to childhood, when I loved to play pretend. Mom’s shoe became Cinderella’s slipper, or a few years later her knickknacks were raided for “magical items” to use in my D&D campaigns.

After Star Wars hit theaters in 1977, my dad bought a Darth Vader mask. For Halloween, he dyed some clothes black, my mom made him a cape, and he built a replica of Vader’s chest plate out of aluminum and electronic parts. My mom made me a Princess Leia dress out of an old sheet and put my hair into buns.

In 1982, my little sister loved the movie “Secret of NIMH.” So, my dad made her a replica of Mrs. Brisby’s magic necklace by taking a round, red bicycle reflector and covering the plastic with gold paint. He even wrote the inscription on the back. “You can unlock any door, if you only have the key.”

Those were my first experiences with the idea that you could become a kind of shaman of your own favorite movies, participating in an alternate reality with the use of masks and talismans.

As an established, professional jewelry designer when Firefly and Serenity came out, I was immediately drawn to the adornments worn by the actresses, and how the jewelry reflected their characters. I started making replicas to help people who were cosplaying Inara, Saffron and Kaylee. 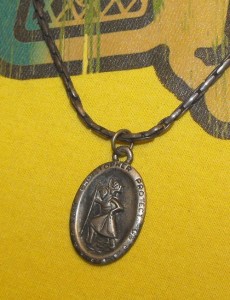 I own the actual necklace worn by Adam Baldwin as “Jayne” in SERENITY. I have it displayed in a shadow box frame, on a replica of the shirt he wore in the movie.

I noticed that Jayne Cobb wore a necklace in the movie. This intrigued me and I wanted to find out what it was. I could tell, on the big screen, that it looked like a Catholic saint’s medal, but I couldn’t tell which one.

By a stroke of luck, the Prop Store of London announced on Fireflyfans.net that it had acquired several Serenity props and costumes, after the items were displayed at Universal Studios. I asked if they had Jayne’s necklace, and they did!

So now I am the thrilled owner of the very necklace worn by Adam Baldwin in the scene where he wants to take River “for a nice shuttle ride.” It’s a Saint Christopher medal. Saint Christopher is not only the patron saint of travelers, which would come in handy when one is “out in the black,” but he also started out as a mercenary who later devoted his life to helping people across a dangerous river. Symbolic, no?

Unlike the bottles, this isn’t just a replica but the actual prop from the movie. But it would be fairly easy – and much cheaper – to make a replica. The medal can be purchased here and the chain is Boston style link chain. 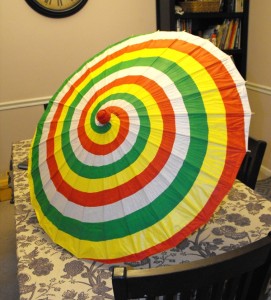 Another popular prop from the Firefly ‘verse is Kaylee’s parasol in the TV pilot episode. I painted one for a charity raffle.

I made nagyx “soul stone” necklaces based on the sacred item in my Stellarnet Series. I gave one to my editor, and offered others as prizes in giveaways and book promotions.