Be my sci-fi Valentine 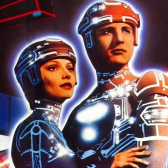 Science fiction has been a part of my life from a very early age, and no doubt played in a role in shaping my early concepts about romance and the types of men I would eventually love. So I thought for Valentine’s Day, I’d reflect on some of the sci-fi couples from my childhood…

Luke and Leia in Star Wars (1977) and Splinter of the Mind’s Eye by Alan Dean Foster (1978). I don’t care what George Lucas says, my Luke and Leia dolls were NEVER brother and sister, and Han Solo was ALWAYS a stuck up, half-witted, scruffy-looking nerf herder.

H.G. Wells and Amy Robbins in Time After Time (1979). I had a huge crush on Malcolm McDowell, even though he was also the psychopathic delinquent in A Clockwork Orange and the titular pervert emperor in Caligula. Luckily for my nascent geek love, I didn’t see those movies until a decade later.

Mary Steenburgen (Amy) went on to portray half of another favorite sci-fi couple, Doc Brown and Clara Clayton in Back to the Future III (1990). Doc was intelligent and wacky, had epic steampunk modding skills, and saved Clara’s life. What’s not to love? 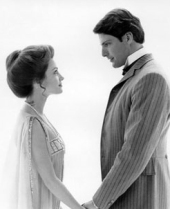 Richard Collier and Elise McKenna in Somewhere in Time (1980). Classic science fiction romance about love and time travel. No robots, no computers, no lasers, but still awesome.

Tron and Yori in Tron (1982). Some girls may have had the hots for the user Flynn and his roguish, devil-may-care attitude, but I liked the nerd/hero with his digital lady love. Bruce Boxleitner also served as half of a later sci-fi couple, John Sheridan and Delenn from Babylon 5 (1996).

Jherek Carnelian and Amelia Underwood in The Dancers at the End of Time by Michael Moorcock. More time travel romance, by the “grandfather of steampunk.” Amelia is from Victorian England, Jherek is from a future so far flung that the universe has begun to collapse back in on itself and the few remaining humans are immortal.

Who are some of your favorite science fiction couples?