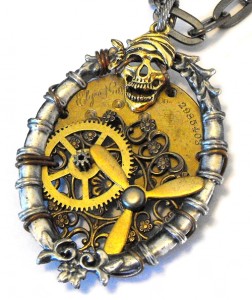 I began making neo-Victorian jewelry several years ago but didn’t learn the term “steampunk” until 2007. My work was not inspired by the steampunk community but by my interest in Art Nouveau, Victorian history, movies such as “Time Machine,” “20,000 Leagues Under the Sea,” “Time After Time,” and a youth spent on Disneyland’s Main Street.

I haven’t enjoyed much steampunk fiction, but I do enjoy the writers from the era upon which steampunk is, more or less, based: Dickens, Wilde, Gaskell, Thackeray, etc. They satirized society and class divisions. The Victorian Era was a time period in which there were massive social, political and scientific changes. Unions, women’s rights, industrialization, child labor laws, safe water and sewer systems, germ theory, Jell-o… just to name a few.

I have a science fiction novel coming out in January. Because I’m featured in two steampunk art books, and because I love the Wild West and the Victorian Era, I’m often asked if the book is steampunk.

To be honest, I have a difficult time relating to the steampunk community. Not because “steampunk at Hot Topic” is ruining anything for me but because of the talk about it being a lifestyle. That’s just too far removed from reality, for me. I’m not interested in pretending to be someone else or having an entire house that looks like Frankenstein’s laboratory. If steampunk is goggles, funny names, competitive biscuit dunking and brass, then I’m not steampunk.

My publisher is calling Stellarnet Rebel a “cyberpunk thriller.” I didn’t sit down thinking “I’m going to write a cyberpunk thriller.” I sat down to write the kind of story I wanted to read — one that seemed to be missing from a literary landscape dominated by steampunk, zombies, werewolves, vampires, and epic space operas resembling fantasy as much as science fiction.

Alex Steffen’s article, “Science Fiction, Futurism and the Failure of the Will to Imagine,” made me want to write about a future extrapolated from current technology and social trends.

The general definitions I’ve seen for “cyberpunk” include high tech and low life, hackers, AI, megacorporations, and the negative impacts of technology upon society. Stellarnet Rebel is set in the squalid confines of an extra-solar space colony where humanity connects via personal devices, walls, ceilings, tables, clothing, even bottles of whiskey. Computers, video games, virtual reality, hackers, the “Stellarnet” (interplanetary Internet) and rebellion all figure prominently.

There are aliens, though, and not all technology is viewed as a bad thing. Some people might call Stellarnet Rebel “post-cyberpunk.” In any case, it’s not steampunk, but maybe I’ll have to write something with corsets and airships, someday.