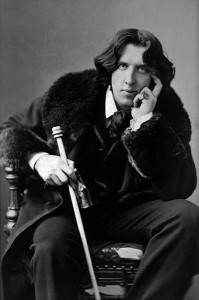 “Man is least himself when he talks in his own person. Give him a mask, and he will tell you the truth.” ― Oscar Wilde

The Victorian author probably wasn’t thinking about the Internet and online gaming. But the words apply. Net-anonymity creates more truth than it hides. A person standing in front of you will not bare her or his soul. But on the net, people are free to reveal, free to feel, free to troll, free to express unpopular opinions unfettered by immediate social repercussions, to transform (or degenerate) into the essence of their true self.

“Human slavery is wrong, insecure, and demoralizing. On mechanical slavery, on the slavery of the machine, the future of the world depends.” ― Oscar Wilde

How true this has turned out to be. Even without robots (yet), we rely on our mechanical devices to free us from the drudgery of cooking, cleaning, sewing, gardening, even walking or entertaining ourselves. Now I’m beginning to wonder if this Victorian author was actually a time traveler.

This photograph was taken in 1882, yet something about him is like a pretender to the 19th century, a 21st century mind donning the trappings of a bygone era. He’s alive, not a rigid golem of sepia tone, nor the echo of a long-dead husk with tired, malnourished eyes and grim visage. He seems a slouching sardonic subject of the cyber era, posing in anachronistic amusement.

“It is what you read when you don’t have to that determines what you will be when you can’t help it.” ― Oscar Wilde

How about what you write, when you don’t have to? What does that determine?

There is something of Wilde in my upcoming book, Stellarnet Rebel. At one point, the heroine directly quotes him, saying, “Who, being loved, is poor?” But there is also something of him in the spirit of the story.

“Every woman is a rebel.”

“Disobedience, in the eyes of anyone who has read history, is man’s original virtue. It is through disobedience and rebellion that progress has been made.”

“An idea that is not dangerous is unworthy of being called an idea at all.”

“Every saint has a past, and every sinner has a future.”

I did not read the following paragraph―written while Wilde was imprisoned doing two years’ hard labor for the “crime” of homosexuality―until after writing Stellarnet Rebel. They are sentiments to which I can only pretend, with characters such as Duin the alien revolutionary, but they are beautiful, horrible, and true. The best fiction is that which tells the truth, and I hope I have done Wilde some justice.

“When first I was put into prison some people advised me to try and forget who I was. It was ruinous advice. It is only by realising what I am that I have found comfort of any kind. Now I am advised by others to try on my release to forget that I have ever been in a prison at all. I know that would be equally fatal. It would mean that I would always be haunted by an intolerable sense of disgrace, and that those things that are meant for me as much as for anybody else – the beauty of the sun and moon, the pageant of the seasons, the music of daybreak and the silence of great nights, the rain falling through the leaves, or the dew creeping over the grass and making it silver – would all be tainted for me, and lose their healing power, and their power of communicating joy. To regret one’s own experiences is to arrest one’s own development. To deny one’s own experiences is to put a lie into the lips of one’s own life. It is no less than a denial of the soul.”

This entry was posted in Science Fiction, Stellarnet Rebel. Bookmark the permalink.