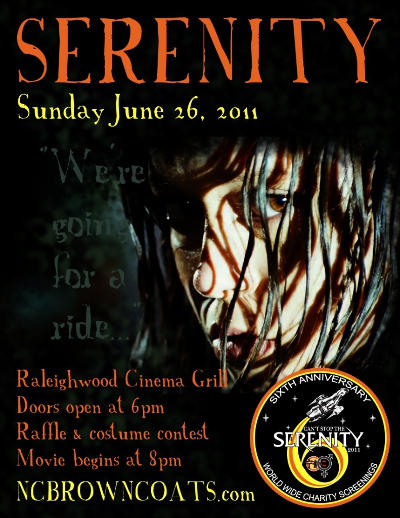 I am a Browncoat. May have been the losing side. Still not convinced it was the wrong one.

For six years, I’ve been involved in the Can’t Stop the Serenity worldwide charity screenings for Equality Now. The screening in my city also benefits Kids Need To Read.

In 2006, I brought the first “Serenity Now Equality Now” to Raleigh. With the help of Jean Best at Raleighwood Cinema Grill, Darren Smith at Wake Forest Awards, and other contributors and volunteers, we put together an event with a movie, costume contest and raffle. The next year, the name was changed worldwide to CSTS. I continued to be the coordinator of the Raleigh event in 2007 and 2008. In 2009, I was a global sponsor via my jewelry website JLHjewelry.com. I donated 60 pairs of Browncoat earrings distributed to cities across the world to use in CSTS raffles, auctions and door prizes. In 2010 and 2011, I was a member of the Raleigh Browncoats CSTS committee.

I will emcee the shindig on Sunday June 26, and run the costume contest and raffle. Special guests, SF author Mark L. Van Name and award-winning costume designer Jennie Faries will be two of our judges. Author and podcaster Christiana Ellis will also be a special guest, and will be signing copies of her award-winning book Nina Kimberly the Merciless.

Learn more at NCBrowncoats.com and please support our wonderful sponsors, and check the CSTS global website for an event near you.

This entry was posted in Conventions & events, News, Science Fiction. Bookmark the permalink.