It’s not the best choice, it’s … THE OUTER WORLDS

THE OUTER WORLDS felt like Firefly fanfiction, complete with twangy guitar riffs, a ragtag crew, old-timey frontier style speech, and an occasional cargo bay full of cattle, as seen in the episode “Safe” from the TV series.

This endeared the game to me, as a long-time Browncoat and supporter of the “Can’t Stop the Serenity” fan-run fundraisers that have contributed over a million dollars to charity.

I started THE OUTER WORLDS during my January 28, 2020, Try-It Tuesday livestream and continued playing throughout February and March.

The visual style was a gorgeous mash up of Firefly and BioShock, with stunning celestial skyscapes but very little variety to the enemies and locations. Conversations dragged and combat underwhelmed. More than once during the first half of the game, I considered quitting and playing something else.

Food, drink, alcohol and tobacco products provided boosts I rarely bothered to use. I only died a couple times and not during a fight – once from falling and once from being scalded by steam in a hallway full of leaky pipes.

Negative experiences, such as being burned or shocked too many times, triggered the opportunity to accept flaws, which weakened the protagonist but granted extra perks. I never bothered with flaws because the perks weren’t worth it, particularly perks for “Tactical Time Dilation” – something like Fallout’s VATS but not VATS, of course – and which I also rarely bothered to use.

The ship itself had an AI personality named ADA who got on my last nerve. Every damn time I returned from a mission or errand, she’d tell me that crew members were talking to each other. Yeah, I get it, they have scripted encounters to make the place feel lived in. Let me wander into the conversations naturally on my own, thanks. How many times do you want me to hear Nyoka yell at Max about hogging the bathroom, ADA? HOW MANY?

In a NoClip documentary about THE OUTER WORLDS, game directors Tim Cain and Leonard Boyarsky discussed the scope of the game and how much they had to cut, which might explain why it felt, to me, like an uneven, incomplete game that never quite realized its full potential. It says a lot, though, that I really wanted it to be more.

There’s a long side quest revolving around Parvati’s date night, as well as a kind of simulated sex scene between ADA and the ship’s cleaning robot SAM, but despite the emphasis on companion relationships and nuanced role-playing, there were no romantic options for the player at all. 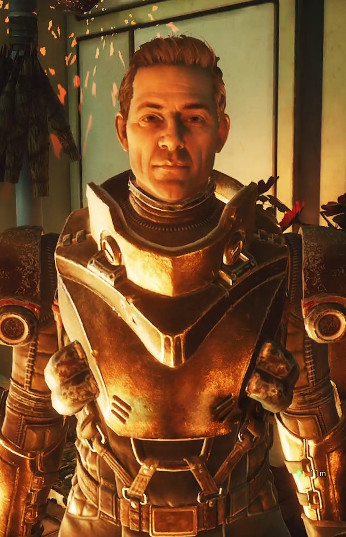 In a Polygon article, Boyarsky said, “We felt like sometimes (romance) kind of waters down your roleplaying for your character because it turns into this mini game of how do I seduce this companion or that companion. So it was just one of the things we felt wasn’t really what we wanted to focus our time on.”

If Obsidian had limited resources and didn’t want to spend them on romantic subplots or alternate endings, I get that. But caring about the crew did not “water down” my game experience. The exact opposite. My fondness for Vicar Max, Felix and Nyoka is the main reason I played THE OUTER WORLDS to completion. They were awesome.

Devs could have at least acknowledged that players might want to roleplay something more than hammering out treaties or meeting Ellie’s snobby parents.

A couple lines of dialog for each crew member would allow them to be approached or flirted with, but then deflect the advances with an excuse befitting each character. Nyoka could say something like “you’re not screwed up enough to be my type,” Max could say he’s too dedicated to his own spiritual struggles to share his life with someone else, Felix could be pining for someone on another world, etc.

Something else that felt a bit incomplete: I obtained two pieces of information that should have been literal game changers but actually changed nothing.

One came from the Rizzo lab on Monarch, where a terminal entry explained how all of the dangerous creatures could be killed by changing the oxygen levels in the atmosphere, and that the change would not harm humans. Far as I could tell, I had no opportunity to discuss this information with anyone. That seemed like terribly important stuff for communities surrounded by packs of wild monsters and clinging to survival by a thread.

The other bit came from Adelaide, a lady I met early in THE OUTER WORLDS, who figured out how to deal with the plague and grow nutritious crops. When I reached the end-game’s big reveal – that Halcyon would collapse due to famine – I had no opportunity to share Adelaide’s discoveries. Instead, we set about rescuing the Hope, not for the inherent rightness of saving the lives on the ship, but because the scientists on board needed to solve Halcyon’s problems… that Adelaide had already solved. (?)

For all my criticisms, the game had its moments and I’m glad I played THE OUTER WORLDS. If there’s ever any expansions and I play it again someday, I’ll probably ignore a lot of the side missions, increase the difficulty setting, and only take one companion with me at a time, instead of two, to make it more of a challenge.

I got the happy ending and I’m satisfied with the choices I made. Overall, it was a good experience, but it could have been so much better.

Highlights and easter eggs are featured on my OUTER WORLDS playlist and my last livestream can be seen here: