BATMAN: ARKHAM KNIGHT is a 2015 third-person action-adventure game offered free to PlayStation+ members in September 2019. Developed by Rocksteady Studios and published by Warner Bros. Interactive Entertainment, it’s based (if you hadn’t already guessed) on the DC Comics superhero Batman.

Batman is one of my longtime favorites, going all the way back to the 1960s “dynamic duo” Adam West & Burt Ward who I watched in reruns during the ’70s. My grandpa gave me a portable radio shaped like Batman when I was around 6, which my dad thought was a crappy toy “for a girl” but I thought it was the coolest thing ever. 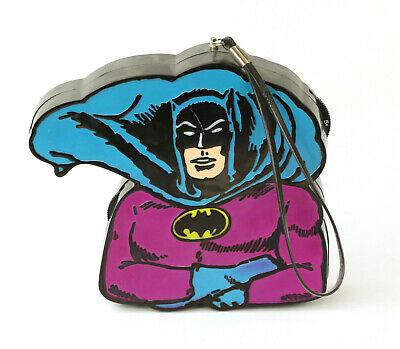 Not my actual radio, that’s long gone, but it looked like this

I wasn’t crazy about the Michael Keaton movies but I obsessed over Batman Forever in 1995 with Val Kilmer, Chris O’Donnell, Tommy Lee Jones, Jim Carry and Nicole Kidman.

I collected Batman Forever trading cards, listened to the soundtrack on CD and even put a discarded promotional display from a local movie theater in my apartment.

It was obviously because of the car, right? “Chicks love the car.”

Or the nips on his PVC batsuit?

Anyway, back to BATMAN: ARKHAM KNIGHT. Swole Batman is hot. All the WHAM! POW! and PUNCH! stuff is fun. The game also has that cool “swoop through the city” thing like the Spiderman and inFAMOUS games, and I love the dark gothic Gotham City environment.

Unlike Batman Forever, however, I don’t love the car. A lot of gameplay involved racing and car-based combat, which I didn’t enjoy. And what’s with Poison Ivy? Could they not even give her some green tights? How long is she going to stay locked in his trunk?

BATMAN: ARKHAM KNIGHT is rated “M” (mature) for ages 17+ due to blood, language, suggestive themes and violence. Available on PC, PS4 and Xbox One.