Almost a year ago, I tried Unravel, a single-player side-scrolling puzzle platformer developed by the Swedish company Coldwood Interactive and published by Electronic Arts. I enjoyed it so much, I bought the full game and played it for my YouTube channel. 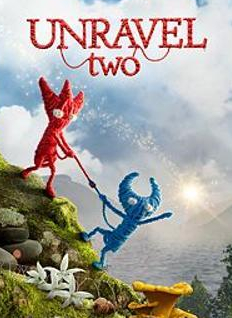 In June 2018, EA announced and released UNRAVEL TWO. This week, I played the free demo for PS4. My 14-year-old daughter played with me and we had a good time.

Unlike the first game, UNRAVEL TWO may be played as either a single-player or a multiplayer local co-op. There are two Yarnies who must work together in order to solve puzzles and manipulate the world. Gameplay is similar to the original, with lots of jumping, swinging on string, and manipulating objects in order to progress through the environment.

The free trial includes the first level and most of the second. There are only seven levels in UNRAVEL TWO, compared to twelve in Unravel, but the sequel also includes twenty bonus challenges.

Rated “E” for everyone, with mild fantasy violence. Like the first game, the sequel has some dark story elements and complex puzzles that might not be understood nor appropriate for younger players.