One of my Patreon patrons asked me to play CHILD OF LIGHT on Try-It Tuesday, so I downloaded the free demo for PS4 this week and dedicated the livestream to them (thanks, Counterserum!).

I don’t know much about the storyline, since the demo dropped me into chapter four, “The Deep Dark Well,” but apparently the protagonist is a girl named Aurora, and she is searching the land of Lemuria for the Sun, the Moon, and the Stars.

Aurora’s blue flame friend Igniculus can be controlled by a single player or is available as a multiplayer option. Other characters join her party and participate in battles against giant spiders, flaming hounds, and boar men. Combat is turn-based. 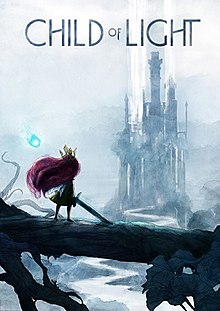 CHILD OF LIGHT is a 2D side-scroller with beautiful, watercolor-style artwork inspired by Studio Ghibli and Yoshitaka Amano. The dialog is written as a sort of nursery rhyme or poem, in keeping with its fairy tale theme.