Honest Hearts touch my own in Fallout: New Vegas 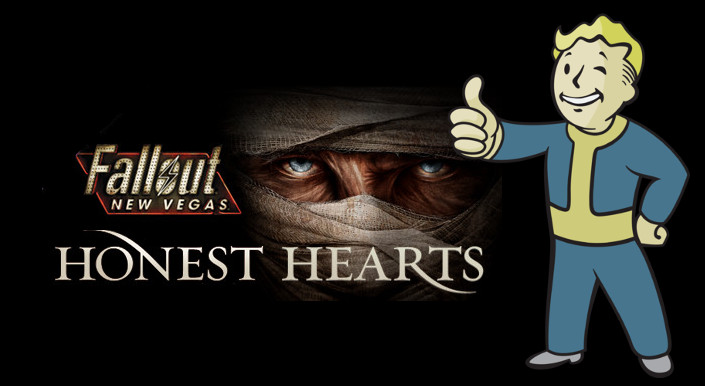 I recently finished the Honest Hearts DLC (“downloadable content” game expansion) for Fallout: New Vegas. In 44 years, I’ve cried at countless movies and books but never video games. Yes, I teared up at the end of the Knife of Dunwall/Brigmore Witches DLC for Dishonored. But uncontrollable bawling? That’s a first.

Honest Hearts is about what happens in Utah’s Zion Canyon after a nuclear holocaust. Among ruined school buses and ranger stations, the player is caught in a war between post-apocalyptic tribes and the conflicting goals of a Mormon missionary and the mysterious Burned Man. 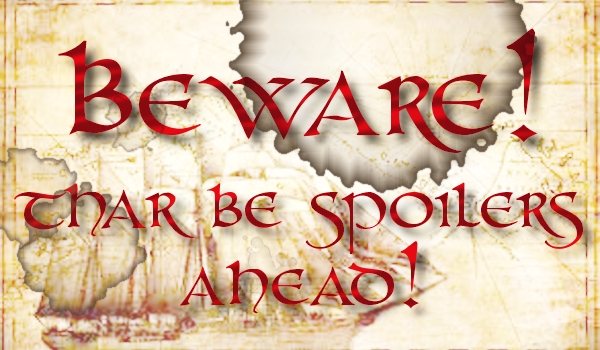 But there’s another story in Honest Hearts, too, one that’s told via hidden shelters and old computer terminals — the story of Randall Dean Clark, a soldier and survivalist trapped in Zion when the bombs fell 200 years before the events of the game.

I was north of Spanish Fork. Took the 77 along Provo Bay to steer clear of town. Would’ve been home in an hour. Engine died, truck just stopped. So did a Chryslus in the other lane. Knew right away.

First nuke hit SLC inside a minute. I was looking South – Lucky Man! Flash behind me so bright world looked on fire. Old couple from the Chryslus starts screaming they can’t see.

When nothing hit for half an hour, took a look. Globe of fire where you and Alex died. Didn’t kid myself.

Didn’t know what to do. Grabbed my pack and rifle.

Saw to the old couple. Sat them up against car, let them hold and comfort each other. Told them I was going to get help, everything be okay. One bullet through both heads. Instant.

Five day hike back to Zion.

You told me. Stop running off to the wild. Man belongs with his family.

Should shoot myself. What I deserve.

Randall spent the rest of his life in Zion, grappling with survivor guilt while he watched the comings and goings of feral ghouls, mutant animals, refugees, and the cannibal remnants of Vault 22. He had a brief relationship with fellow survivor Sylvie, until she and their unborn son died in childbirth.

Playing the DLC, tribe members spoke often of the “Father,” his love for them, and how they avoided his taboo caves. At first, with the presence of the Mormon missionary, I assumed they spoke of the Christian god but eventually realized that they meant Randall Clark, the survivalist. Unseen, he’d spent his life assisting their ancestors, leaving them weapons manuals, medical books, supplies and messages preaching the value of kindness and mutual care. And he became a “vengeful spirit” who used his military skills to protect the innocent from evil. 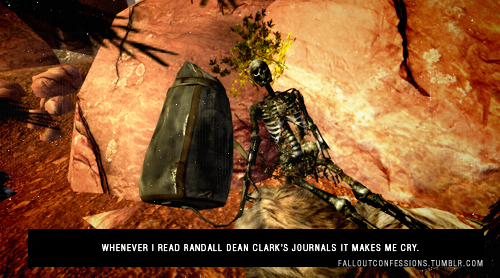 Randall eventually developed lung cancer. Reluctant to shatter the illusions of the children by revealing himself, alive or dead, he climbed to a high place where the children would be unlikely to find his corpse and allowed himself to die of exposure.

“It’s cold enough that I won’t last long on the high mound up next to Red Gate. I think I’ve got enough breath left in me to make it. I’ll just lie down and stare at the sky. Feels right.”

I couldn’t even explain the story to my husband the next day without crying again. And I can’t reread the survivalist’s logs without tearing up now. Lip is quivering.

“I hope they’ll do well. I hope no harm comes to them, from within or without. Did my best to prepare them with the last notes. Said something kind about each one of them, what makes each one special. Told them ‘The Father’ was pleased by their kind natures and that it would be up to them to handle things on their own from now on, that I’d be silent but still watching and still caring.

“Lied to you, Char. And Alex. And Sylvie. Told you I’d be with you forever. But I wouldn’t go back and unsay it once if I could.

“What was the point of it all? So many failures.”

The Survivalist was designed by J.E. Sawyer, and his diary entries written by John Gonzalez. Maybe someday they’ll see this blog and know how very much this story touched my heart.

Why? Because I am Randall Dean Clark. Every single day, I am torn between wanting to give up and wanting to go on. I look at the world and it seems like such a bleak, desolate place, like the Mojave Wasteland. So much greed, corruption, fear, anger, ignorance, pain, hopelessness, despair. I often wonder what’s the point of it all, and yet I keep trying. The only meaning in life for me is the good I might do for others, the hope that it makes the world a little bit better for someone else, and preparing my children to survive in this world without me. 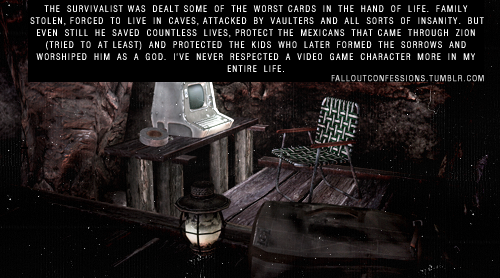 Seeing how the effects of Randall’s actions echo down through the years, not because he’s some mystical magical supernatural god, but simply because he’s a human being who suffered immense pain and loss, yet in spite of “so many failures,” still chose to go on, to survive, to educate, to have compassion for those in need and righteous fury for those who would enslave or cannibalize others — that’s the most meaningful story I’ve ever experienced in a video game.