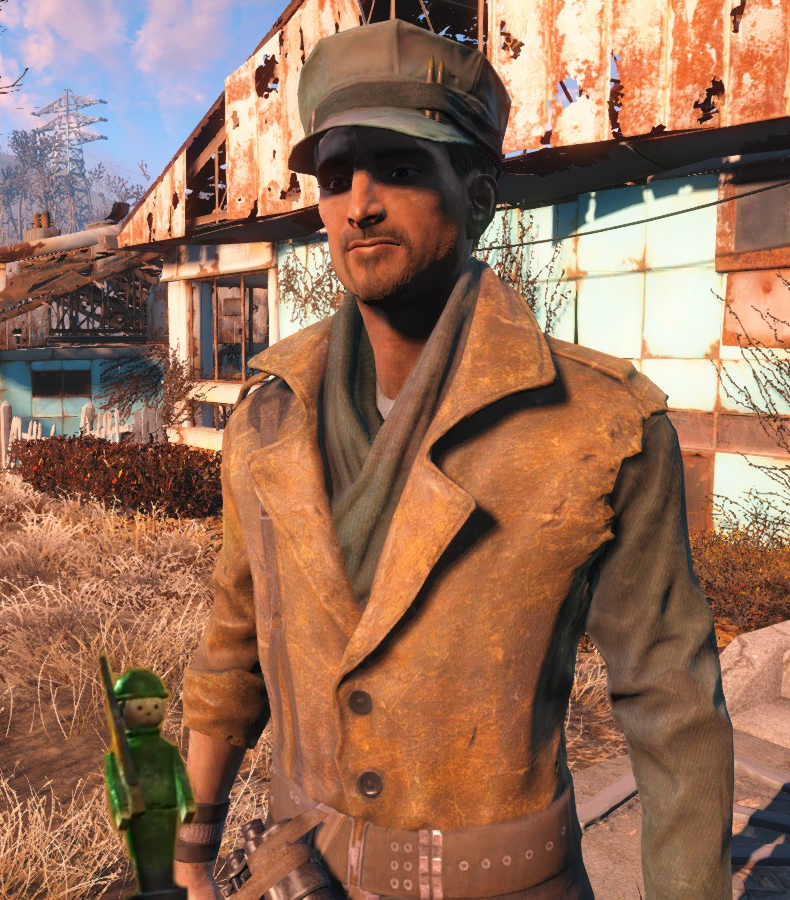 “MacCready’s Wooden Soldier” is my take on how my Sole Survivor, Fiona, romanced MacCready. Fallout 4 players will recognize some of their conversation straight from his max affinity dialog in the game.

Fiona shuffled through sketches, maps, reports, supply requests, and various lists that Preston scrawled on whatever scraps of paper he could find. She scanned an inventory of the Castle mess hall written on the back of an old Slocum’s Joe advertisement and then threw it back on the table.

MacCready slouched against the wall behind her, cradling his rifle in the crook of his arm.

“Any thoughts about rebuilding this place?” she asked over her shoulder.

He stroked the thin goatee on his chin. “I’m not really the hammer and nails sort of guy, but my guess is you’ll need a lot of concrete.”

She laughed. “What we really need is people. Why didn’t you ever join the Minutemen?”

Right. She’d have to change that. “Raiders have sheer numbers, the Gunners are well-organized, the Institute… well, they’ve got whatever they’ve got, and it won’t be good. Plus, there’s a mutant camp not too far away.”

She should have expected a former Gunner to say that. “That’s why I’ve been hoarding every weapon I can find. I know you whine about it, but we’re going to need them.”

“I don’t ‘whine.’ When have I ever whined about anything?”

“Hey, you point and I shoot. That’s the deal. It was never in the contract that I’d haul eighteen combat rifles and fifty desk fans around the Commonwealth for you.”

She unrolled a sketch of the Castle, anchoring the corners with her 10mm, a combat knife and a couple of rocks. MacCready came over to take a closer look.

“Ronnie’s got schematics for artillery.” Fiona pointed to the northwest and southwest corners. “I thought maybe we’d also put gun turrets and guard posts here and here, along the ramparts… the, uh, walls…”

“I know what a rampart is. I’ve read every issue of Grognak the barbarian, except the one where Skullpocalypse teams up with Mastadonald.”

She smiled. Nate had liked Grognak, too. “I might have that one. Or maybe we could search Hubris Comics again.”

His fingers twitched on his rifle and his eyes darted around the armory. “Listen, uh, can we talk? I’ve been waiting for the right moment, and I suppose this is as good of a time as any, since we’re alone.”

Fiona turned around and leaned her ass against the edge of the table. He didn’t look anything like Nate, but he was easier on the eyes than anyone or anything else in the wasteland hellscape. Looking at him was like seeing a little four-leaf clover growing up through cracked, black pavement.

“Is something wrong, Slim?”

“After helping me get Duncan’s cure from Med-Tek, I figure I owe you something… and I always pay my debts. I wanted you to have this.”

He slung his rifle over his shoulder, reached into his coat, pulled out a small toy and handed it to her.

“I know it’s a strange reward for risking your life, but this one’s special. It means a lot to me. It’s the most precious thing I have. I used to have a lucky Blue Quantum bottlecap, but I gave it to Hancock. Long story. Don’t ask.”

For a man who loved caps as much as he did, there had to be a reason he put so much value on a toy. “Did you make this yourself?”

“Do I look like the artistic type to you?”

That sharp tongue of his could sometimes cut through a tense situation to find humor, sometimes cut away bullshit to find truth. Sometimes it just cut.

His eyes looked more red and watery than usual, and he took a few long, shaky breaths.

“My wife Lucy gave this to me, okay? I told her I was a soldier and she made it for me. Never could bring myself to tell her the truth, that I was just a hired killer. The soldier story was the best thing I could come up with. I didn’t want to lose her because of what I was.”

“Sometimes it’s difficult to be honest with the people we love.”

“It doesn’t really matter anymore. She died a few years back.”

MacCready knew all about what happened to her husband Nate. She was surprised he hadn’t told her about his wife before. “I’m so sorry.”

“It’s not something I like to talk about. We made the mistake of holing up in a metro station one night. We didn’t know that the place was infested with ferals. They were on her before I could even fire a shot. Ripped her apart right in front of me. There was nothing I could do. Took everything I had to escape with Duncan in my arms.”

“My god, that’s awful.” Memories of Nate’s death flashed through her thoughts. “I know how that feels. The helplessness, the horror.” Tears clouded her vision.

“That’s why I didn’t want to tell you about my wife, what happened to her. You have enough to deal with.”

He sighed. “Sometimes I think maybe it would have been better if we’d died there with her.”

“Better? For who? Not for Duncan. He’s going to get well and you’re going to see him again soon. And not better for me. I need you. I wouldn’t have gotten this far without you.”

“I just miss her so much sometimes.”

Fiona examined the toy soldier. She had so little to remind her of Nate, just his wedding ring and memories. Everything else was in ruins.

“Of course you do. She was your wife, the mother of your son. I miss Nate, too.”

“No matter how bad things got, Lucy was always there with a shoulder to lean on. It gave me… well, it gave me the courage I needed to press ahead, to never give up. When she died, I thought that feeling was gone forever. Then I met you. You have the world’s problems on your back and here you are helping me with mine, lending me your shoulder like Lucy did. I just want you to know how much your friendship means to me.”

His face reflected her pain, the desperate fear of loneliness, the crushing weight of the world, their concern for their children, their shared losses, and the need for comfort.

“I… I don’t know. I mean, I never thought you would feel that way. Not about me. What about your husband? I know he’s gone, but you still love him, don’t you?”

“Would it bother you if I did?”

“I don’t know. I miss Lucy to death, too. But at some point she would want me to move on, don’t you think?”

“Nate would want to do all the living he couldn’t do.”

She took his hands and held them between hers. His thin fingers felt cold as ice, his fingernails outlined in dirt. She was surprised how fragile he felt. So different from Nate, who’d been her rock.

He started trembling like a tree branch in a radstorm while he talked. “I know I was taking a chance dumping all my feelings on the table. But now that I know how you really feel about me, it was definitely worth the risk.”

She kissed him. He tasted like stale cigarettes and Nuka Cola. He tripped over her boots trying to get closer to her and his teeth scraped her lip. She wondered if he’d kissed anyone since his wife died.

She pulled back just a little, to let him catch his breath, and asked, “Are you okay with this?”

“Absolutely. For once in my life, everything’s going right.”

He kissed her again. The brim of his hat hit her forehead and he didn’t seem to know what to do with his hands until she put one on her ass and the other on her breast. He groaned and pressed against her. He either kept a bull-barrel .44 in his waistband or he was impossibly hard. Fiona wanted to give him what he so desperately needed. What they both needed.

“General?” Preston’s cool voice interrupted the heat of the moment.

She gave MacCready a little push and called out. “What is it, Preston?”

He adjusted his pants just as Preston entered.

“Another settlement needs our help.”

She looked at MacCready. “Duty calls.”

“Sure. You lead and I follow.” He was all business, as if nothing had happened, except for the bright pink flush to his cheeks.

“We’ve had a distress call from Finch Farm. They’re being harassed by mutants and we don’t have anyone we can send out there.” Preston’s eyes darted back and forth between them. She could tell by the look on his face that he didn’t approve of the mercenary from Goodneighbor.

“We’re on it,” Fiona promised. But once those green bastards were handled, she was taking Mac straight to her house in Diamond City.