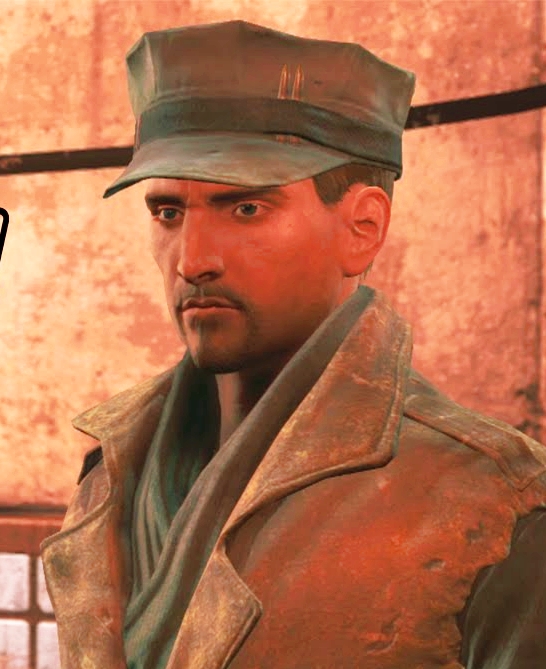 “MacCready Meets the Mayor” is my take on how MacCready arrived in Goodneighbor and met Hancock for the first time.

Little wonder Daisy wanted another gun with her on the road to Goodneighbor. She and MacCready killed three raiders, five molerats, two super mutants and a mutant hound, before reaching the most notorious town in the Commonwealth. They also found a sleeping yao gui who, thankfully, stayed asleep while they backed away slowly and took another route through the ruins.

His teeth hurt from biting his lucky Blue Quantum bottlecap.

A couple of drifters weren’t so fortunate. Their pungent corpses rotted beside an “All are welcome” sign splattered with fresh blood.

She led him down a narrow alley without guards, spotlights or gun turrets, lit by a neon “Goodneighbor” sign. He held his rifle ready, one finger nervously tapping the trigger guard. When they reached a wall of tires and scavenged boards, MacCready scanned the windows of the Old World buildings that boxed them in. A few snipers and they’d be fish in a barrel.

Daisy tucked her 10mm pistol into her belt and adjusted her coat. “Play it cool, kid, stick close, and let me do the talking.” 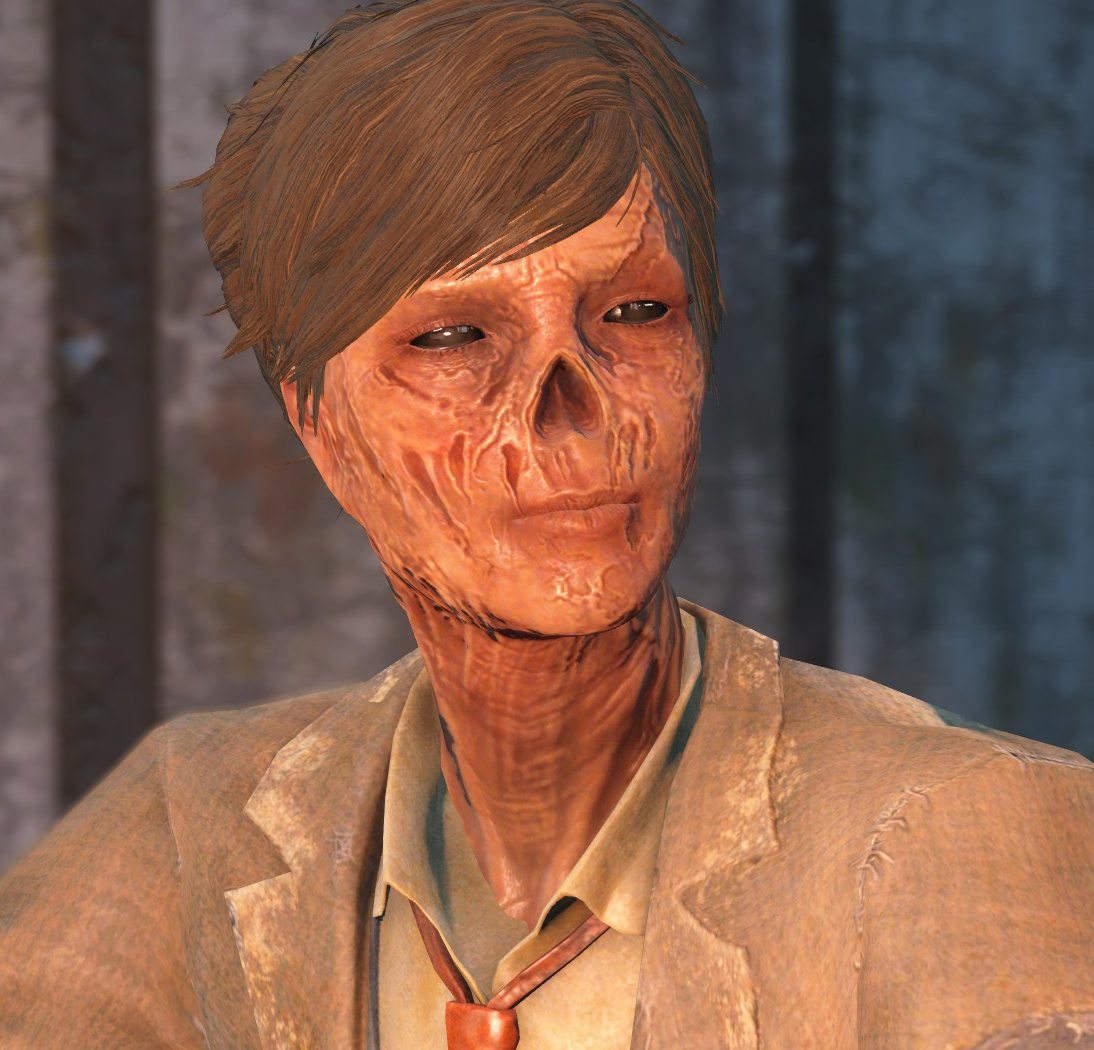 He had a hard time reading her noseless face. Now they were far from the Gunners, he wondered if she’d try to weasel out of the 200 caps she promised, maybe offer him a trade. Chems, booze, flesh. Or pay someone 50 caps to stab him in the back. Killing was a popular solution to life’s problems, and one MacCready understood all too well. Daisy was a ghoul, which meant she’d been around awhile, and no one survived that long without being ruthless.

He pushed the bottlecap into his cheek. “Don’t worry. I’m not letting you out of my sight ’til I get paid.”

“And here I thought you were with me for my good looks.”

She opened a single, narrow door in the barricade and MacCready followed her through. Two hours before dawn and people slept on the pavement next to piles of garbage while others shuffled between streetlights, crying, arguing, drinking.

He heard the unmistakable voice of an assaultron and raised his rifle. Daisy caught the barrel in her hand and pushed it down. “I said, let me do the talking.”

“You’re gonna talk to an assaultron?”

As if giving it a name made it okay. He’d rather go up against a deathclaw. At least a deathclaw didn’t shoot lasers from its eyes.

“Hey, you new in Goodneighbor?” A bald bruiser in road leather approached them. His face had seen a lot of abuse and his sneer made MacCready want to abuse it even more.

Daisy applied her usual charm. “Me and the mayor go way back. All the way to Diamond City.”

“That so? Well, if you wanna spend any time in this town, you’re gonna need insurance.”

“I brought my own, thanks.” She let go of MacCready’s rifle, just in case he needed to do some “talking.”

“That’s your insurance? Where’d you find him? In the bargain bin? Half-off?” The big asshole laughed at his own joke.

Assaultrons might bother him, but mungos MacCready had dealt with all his life. “Sounds like you found your brain in the bargain bin.”

“Clean the tatos outta your ears and maybe you’d hear me.”

“Daisy! What brings you to Goodneighbor?” A ghoul in a fedora, toting a submachine gun with an air of authority, interrupted MacCready’s fun.

The asshole oozed back into whatever hole he’d crawled out of. Loser.

“Fallen on hard times, Lloyd,” said Daisy. “Is the mayor in?”

“Sorry to hear that. Yeah, he’s up the stairs in the Old State House.” He gestured to the nearby brick building. “Go on in.”

MacCready tucked his lucky cap into his pocket. He counted five more guards inside. Two on the ground floor, two at the top of the stairs, all with the same hats and guns, and a redhead with a raider haircut and a face like thunder, who watched MacCready like a hawk from the corner of the mayor’s office.

The mayor himself sprawled on a couch surrounded by more alcohol, chems, caps and food than MacCready had ever seen in one room. Hancock wore a ruffled shirt, red coat and a tricorn hat, like the undead pirate king in Grognak issue 46, Curse of the Mummy Marauder. 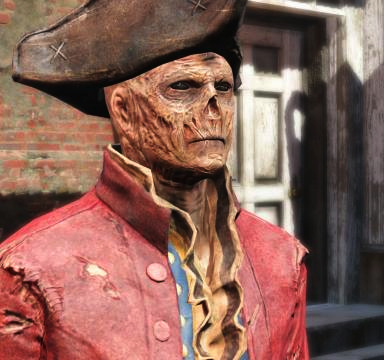 MacCready decided then and there that he needed a cool coat. Something that would hide his Gunner fatigues and make him look like a swashbuckling renegade mercenary. Then he’d be rolling in caps.

“Well, I’ll be damned, Daisy, what brings you to Goodneighbor?” The mayor offered her a seat beside him and poured her a drink. “Vodka, right?”

“John, you are a sight for sore eyes.” She accepted the drink, emptied the glass in one gulp, and he poured her another. “What’s with the thug at the gate? Tried to make me pay a toll. Didn’t think that was your style.”

“It’s not. Must be an independent operator. I’ll look into it. Who’s your friend?” Hancock’s black-eyes fixed on MacCready.

“Robert Joseph MacCready. Or RJ. Or just MacCready. MacCready,’s fine. Sir.” He hated being forced to use titles in the Gunners, but if anyone deserved respect, it was the mayor of Goodneighbor.

“Fuck that ‘sir’ shit, we aren’t like that around here. Mayor or Hancock. Or Mayor Hancock will do just fine. I start wanting to be called ‘sir,’ you put a bullet in me. You feel me?”

“He got me here on a promise of 200 caps. I had to cut out quick and leave my stash behind.” Daisy swigged the second drink and without missing a beat, Hancock poured her a third.

“Say no more. I got you covered, sister.” Hancock gestured to the redhead, who paid MacCready without a word.

Daisy’s voice got all warm and motherly, like the way Lucy used to talk to Duncan. “Thanks, Johnny. You’re a real doll. I’ll make it up to you.”

“I know you will. You need anything else?”

“I was hoping you’d have work for me and my friend.”

Daisy promised to put in a good word for him, and here she was doing it. MacCready wasn’t used to people doing exactly what they said they’d do, especially when it was something nice. There had to be a catch.

Hancock lit a cigarette from one of the many packs scattered across the table and MacCready took a deep, envious inhale of the secondhand smoke. He hadn’t lit up in three days.

“As a matter of fact, we need a new trader.”

“What happened to Jerky?”

“Sold a stale box of Dandy Boy Apples to the wrong guy, I guess. Earned himself the six-finger gut punch. One of his customers found him. So now I got an empty store and no where to buy knickknacks. You can set up shop, if you don’t mind the blood stains.”

Hancock grabbed a sawed-off shotgun from the table. “That ain’t the sound of a friendly tussle. All hands on deck!”

Someone yelled, “Mayor, it’s mutants!” from downstairs, and the mayor said all the words MacCready promised his son he wouldn’t say.

“Farenheit, you stand right here and shoot anything green that comes through the door. MacCready, with me.”

MacCready followed the mayor into a room with a huge bed and an obscene amount of Rad Away.

“They been eying us ever since they moved into Faneuil Hall.”

“Daisy and I may have taken out one of their scout patrols on the way in.”

“Super mutants generally don’t have a ‘live and let live’ philosophy, which forces us to defend ours.” Hancock opened a door on a balcony overlooking the town square. “Welcome to Goodneighbor, assholes! Kill ’em all!”

He punctuated his shouts with bullets as guards and citizens dealt with the hounds and mutants funneling into the streets.

Through the storm of gunfire, MacCready heard the assaultron in the distance and was glad they were on the same side. Then the sickening electric beep of a wired suicider hit his ears.

Thought became instinct as he zeroed in on a hulking mutant strapped with a mini-nuke, running their direction. He fired. The mutant fell, head in pieces, nuclear device intact. MacCready put down three more mutants before the fight ended.

“The bigger they are, the harder they fall.” He’d read that in a Grognak comic and it seemed like the badass thing to say, so he said it.

Hancock surveyed the courtyard. “Not bad. What’s it gonna take to keep you around awhile, MacCready? Jet? Blackjack and hookers? Or… uh… a cram sandwich?”