Fallout 4 fanfiction: “A Home No More” 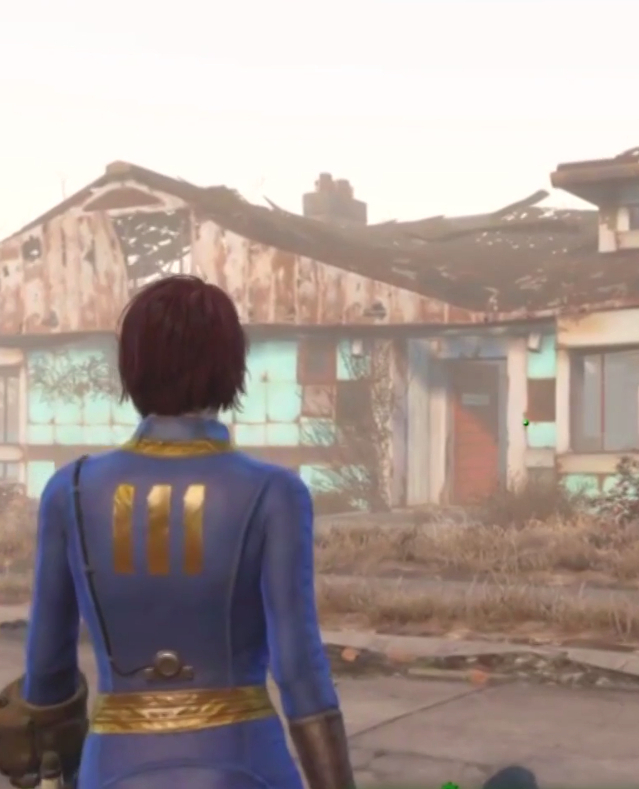 “A Home No More” is about Fiona, sole survivor of Vault 111, adjusting to life in the Commonwealth wasteland.

A Home No More

Fiona walked to the cemetery, its small cluster of crosses made from the white picket fences of Sanctuary Hills. She read the painted names.

Preston Garvey and his Quincy refugees helped her lay the victims of Vault 111 to rest in a field beyond the edge of the neighborhood. Then they’d piled furniture, fallen trees, tires and scrap metal between the houses to keep out anyone or anything might do them harm. But all the junk walls in the Commonwealth couldn’t help her sleep at night, not after seeing her husband killed and her son taken.

She reached into her pocket and touched his gold ring, too large to wear but she kept it close.

What the hell do I do now, Nate?

A sickening, wet, crunching sound interrupted her thoughts and she turned, drawing the 10mm she’d found in the vault and kept by her side ever since. A few yards away, Sturges brandished a pipe wrench, a couple of dead radroaches at his feet.

“You gotta watch out, these things’ll sneak right up on you.”

Fiona holstered her pistol and crossed her arms, so Sturges wouldn’t see her hands shaking. “Roaches were a lot smaller, back in my day.” 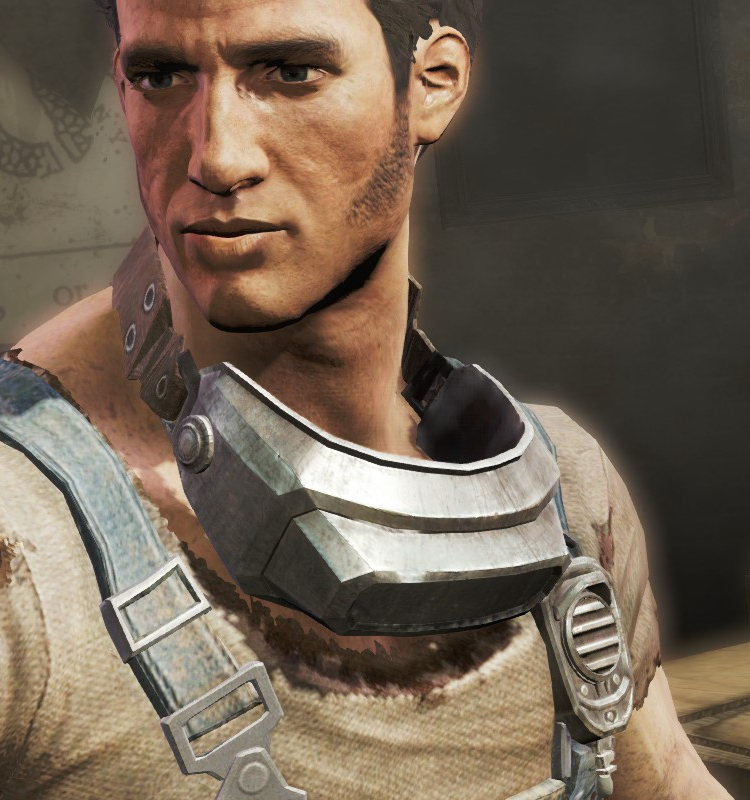 He returned the wrench to his tool belt. “These are big’uns. You wanna join me for lunch? There’s enough here for you, me, and Mama Murphy.”

A few months ago—correction, a few months and 210 years ago—she would have laughed at the thought of eating giant, mutated bugs. But the threat of actual starvation wasn’t fucking funny. If she wanted to find out what happened to Shaun, she had to survive, and the Super Duper Mart in Lexington where she used to buy groceries might as well be on the moon.

She picked up the dead radroaches, one in each hand, and fought the urge to gag. “I’ll see if there’s any wild mutfruit in the cooler.”

The “stove” was a scavenged piece of chain link fence over a campfire, and the “cooler” was an ice machine from the nearby Red Rocket station, powered by a wind turbine that Sturges built out of scrap. He’d also built a water purifier, which he stopped to inspect on their way back to the settlement.

“I really wish you wouldn’t come out here by yourself. You can always ask me or Preston to come with you.”

Fiona tried not to notice that one of the dead roaches still had a twitchy leg.

“Yeah, I get that. But at least take Dogmeat. Or even Codsworth would be better than nothin’.”

He was right. She couldn’t take safety for granted, not even in her own backyard. There were radroaches, bloatflies, wild dogs, raiders and worse, like that thing she encountered in Concord, emerging from the sewers like a demon from hell. A deathclaw, they called it. A nightmare.

“Just say it, Sturges. I need to stop being so damn stupid or I’m going to get myself killed.”

“You aren’t stupid, you’ve been through a lot and still getting your bearings, that’s all. It doesn’t hurt to have someone watch your back.”

For what seemed like the millionth time, she felt grateful for Sturges’ wasteland wisdom. Codsworth was programmed to help her clean a house, not survive a nuclear holocaust. Preston seemed perpetually distracted by the dissolution of his Minutemen organization, when he wasn’t obsessively patrolling the settlement and listening to radio messages. Mama Murphy spent her time sitting in a chair and talking to Dogmeat. The Longs kept to themselves, though she understood only too well the haunted look on Jun’s face and Marcy’s constant anger. They’d lost a home and a son, too.

Sturges had shown her how to identify edible plants, butcher radstags, plant tatos, mix Radaway, and improve the weapons they looted from dead raiders. He gave her a crash course in everything her comfortable 21st century life had allowed her to ignore. 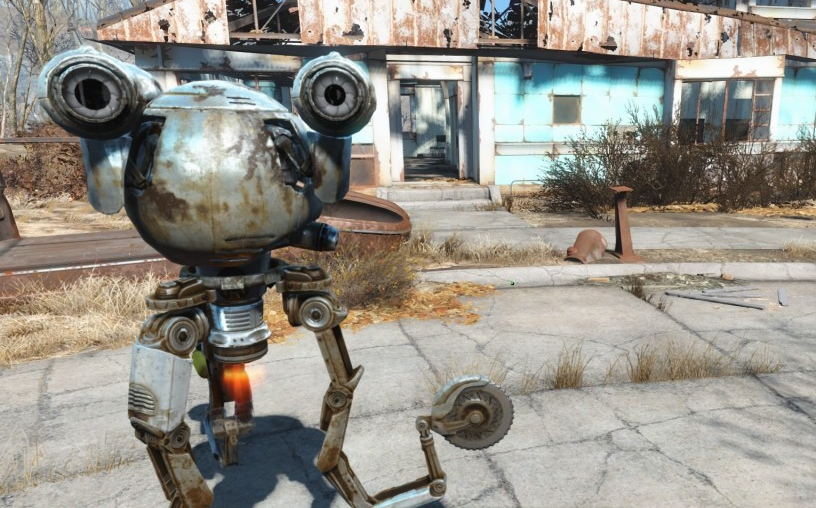 When he finished with the purifier, Fiona followed him to the carport of the old Hawthorne residence, across the street from her house. A home no more. She couldn’t bring herself to live there, or to touch the broken crib in the corner of Shaun’s room. So she slept in the Hawthorne’s former kitchen with Mama Murphy nearby in the dining room and Sturges just down the hall.

“Hey, before we eat, I’ve got something to show you.”

She left the radroaches on the grill, where they’d be boiled like lobsters in a big pot of water, and followed Sturges inside. God fucking knew what fresh hell he had in store. He greeted Mama Murphy as if she wasn’t a crazy old woman who mumbled to herself, then headed into the bathroom.

At least it wasn’t another two-headed creature or some weird-ass survival skill, like making bombs out of bottlecaps and lunchboxes. Just a shower head with some pipes and handles.

He tapped the brim of her hat with a playful flick of his fingers. “Now, why would I make something that didn’t work? I tried it out this morning, so you tell me. Do I smell better’n usual?”

She readjusted her hat, leaned close and sniffed. “Like soap and duct tape.”

“Well, isn’t that better’n than smelling like a mutant’s meat sack? Looky here.” He turned it on. “It’s even got hot water.”

“No shit?” She rinsed bug juice off of her hands in the warm spray.

“I wouldn’t shit you, you’re my favorite turd.”

“It’s something my old man used to say.”

“Your old man’s a goofball, just like you.” She turned off the shower and shook her wet fingers at him.

He made an exaggerated show of wiping the water drops from his face, but didn’t stop smiling. “That he was. Now, you gotta haul water from the purifier to keep the tank full, I don’t have it connected yet, but I’ll get around to it one of these days, if I can scavenge a little more pipe from some of these houses. You like it?”

His grin was contagious. “I love it. I can’t believe the things you come up with. I don’t know what I’d do without you.”

“Wash with a bucket of cold water and a rag, like everybody else.”

“I mean it, Sturges, if it wasn’t for you, I’d be…” Like the turn of a handle from hot to cold, her mood turned suddenly from laughter to tears. “I’d be dead.”

He pulled her into his arms and she cried into the bib of his overalls. He offered her a frayed Jangles bandana from one of his pockets.

She accepted and wiped her nose on an unstained corner. “I’m sorry.”

“For what? For being human? Happens to all of us, now and then. Let’s get lunch started, then you and I are gonna work on another one of those gun turrets.”

That night, by the light of a single bulb hanging in the hallway, she took her first shower since the bombs fell. The water ran out in ten minutes, but she felt almost normal while it lasted.

She pulled on a flannel shirt and a clean pair of underwear. Well, as clean as they could be after boiling and hanging them up to dry. Then she gathered the leather clothes and armor she’d been wearing ever since she pulled them off a dead raider in Concord. Not her finest hour, but she’d be damned if she ever wore a vault suit again.

When she reached to turn off the light, she saw Sturges in his room, laying on his side with his back to the door. Not that the rooms actually had doors, not even the bathroom. Privacy seemed pretty low on anyone’s list of priorities. He’d ditched the tool belt but slept in his overalls. Blankets and pajamas, like privacy, were luxuries of the past.

She tugged the cord and the light went out. Moonlight spilled through holes in the walls, illuminating his broad shoulders. So tired and lonely, she crossed the threshold, left her clothes bundled on a bureau with a missing drawer, and climbed into bed behind him. The old rusty bedsprings screeched.

Without a word, he found her hand in the dark and drew it to his chest, pulling her close to spoon against his back. For the first time in weeks, she fell asleep quickly and slept past dawn. 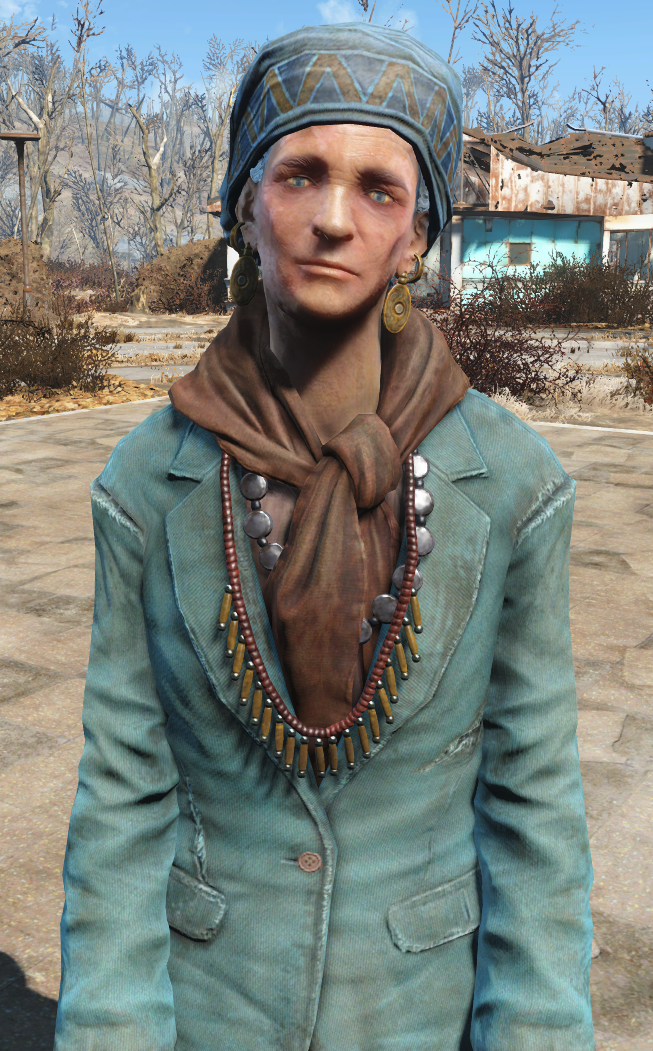 Sturges wasn’t in bed when she awoke to the miraculous smell of coffee. As she dressed, she heard Preston talking to Mama Murphy.

“Have you seen Fiona?”

Preston caught her buttoning her leather vest and lowered his gaze to the floor.

“Everything all right, Preston?”

“I … uh… heard that something happened… out at the Abernathy place. Thought we might head over there, see if they needed our help.”

He stepped aside to let her pass and she poured herself some coffee from a rusty pot. Like the shower, she felt almost normal as she lifted the cup to her nose, closed her eyes and inhaled. Then she opened her eyes and saw the stained mug with its broken handle, the sickly yellow sky through the crumbling roof, and Preston with his weird colonial getup and laser musket. So much for normal.

“Sturges made coffee,” said Mama Murphy. “He found the tin when we arrived, but I guess he was saving it for a special occasion.”

“I’ll wait outside. We can leave whenever you’re ready.”

Whatever Mama Murphy thought had happened, and whatever Preston suspected with his averted eyes and awkward pauses, hadn’t happened. Not yet. Right now, they were just two people in a crazy, fucked up world, trying to get through the night.

Nate would’ve understood. Hell, if the tables had been turned, if she’d been the one clinging to Shaun… No, she couldn’t think about it or she’d need the Jangles bandana again.

It broke her heart to imagine Nate wandering the wasteland alone. A small part of her was glad he’d been spared the horror, even if it meant she had to experience it in his place. She didn’t know what she believed in any more, but if she had to believe something, she believed in finding out what happened to Shaun so Nate could finally rest in peace.